The Cape of Good Hope blows

Woke up this morning and no wind! No wind!! Do you know what that means? The tram may be open! Heck Cape Point might not be hurricane lethal ! But first breakfast.

Coffee is almost impossible to come by in this hotel. That is, if you can find a cup and saucer. I really am not sure how it came to pass, but after asking another table where the coffee came from, I found a passing busboy and got a (I think) clean cup. I put my coffee on the table and a glass of orange juice and left my eBook in search of actual food.

I returned with a plate covered in bacon, eggs and some sort of bread to find a man sitting at my table. I pulled out my chair, put down the plate said Hi and sat down. He looked up and said Hi and went back to eating. I sat down and ate my breakfast and we never exchanged another word. Just like Sunday breakfast with my parents.

I have been on cable trams in several countries, especially when skiing. I’ve never been to the end of a continent before, so the decision was made. I tabled Table Mountain for a later date. 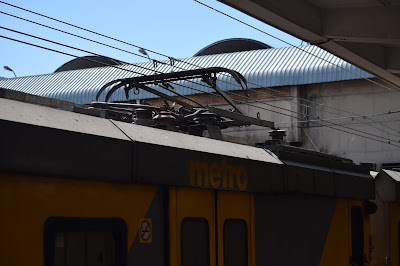 I asked the desk clerk to call me a regular cab and not the hotel cab. In a flash I was comfortably sitting next to the driver on my way to the train station. This time my iPhone is staying in my pocket and my camera wrapped tourniquet like around my wrist I fund the train, but it didn’t leave for another 30 minutes. At first I sat outside and watched people walking by. Pulling my camera closer as some younger men walked near. I decided to sit on the train and wait for it to pull out of the station. Instead of sitting near a door like last time. This time I’m in the middle of the car. I hate, hate, hate this feeling of being hyper-aware of my surroundings. Thinking everyone wants t steal my property. It is not fun. 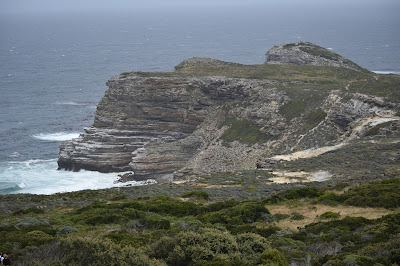 Just like last time the train turned into a bus and drove us two stops to the correct station. I found a waiting car and asked the driver how much he wanted to go to Cape Point. He gave me a price, that was high, but it is a long way from Simonstown and h said he’d give me plenty of time at the point. In the big scheme of things it was fine with me. We drove for a half hour or more and then turned off the road to enter the park and stopped. The line of cars was a least a mile long, so we waited.

Eventually we made it to the ticket booth and even though he was driving a taxi and a local they wanted full entrance fee for him. That explained part of the reason the price was a little high, because he had his share out ready to pay. I told him to give me a few Rand to round out the bill for two and paid his entrance fee.. I’d struck the deal with him assuming I was paying for the car and his time and he wasn’t going to be charged the entrance fee. I’ll look at it as his tip. 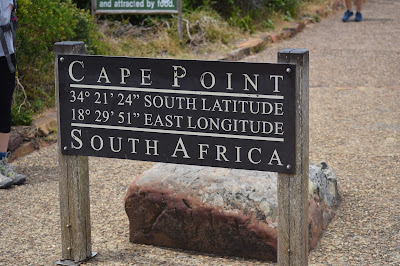 Once inside we drove anther fifteen minutes to the parking lot for Cape Point. The place was jammed with tour buses, limo vans, taxis and cars. That really brought home it was a summer’s Sunday. Except it didn’t feel exactly like a summer. Well maybe summer in a typhoon. The nice calm day I left behind in Cape Town had evolved into gale force winds at the Cape. I could see the Indian Ocean and the Atlantic Ocean and still get blown backwards I tied to get up to the lighthouse and the wind kicked my ass. 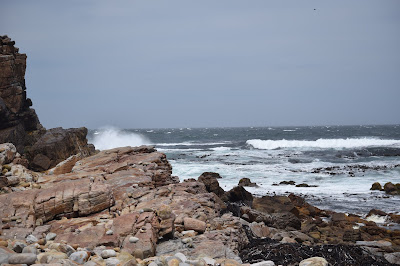 I made it back to the car and told him I was a wimp. He suggested a different location and I voted a big Yes. We drove back the way we came and then turned off the main road and down a long grade to The Cape Of Good Hope. The traffic was as bad as it was at the point and the winds might have been worse. Trying to get a picture of the sign was a chore Worse than getting a shot at the Taj Mahal. The best thing about all those people is that they sort of broke the wind for you. It was colder here too. Enough of this fun. I fought the wind and the wind won. It was probably gusting to forty and it just wasn’t worth it. If I want to be at the end of another continent I think I’ll try Key West.

I got back in the car and safety. Told him it had beat me. He said that the day I had been looking at the penguins it was blowing at 65 knots. Which Google says is a hair under 75 miles and hour. So today it wasn’t even really blowing that hard. Ya, sez you buddy.

I thought about walking Simonstown but it is your typical seaside town that caters to tourist. Lots of pastel colors, car shops, t-shirt stores, dress shops, spelled Shoppe. I do almost no shopping and the wind was blowing here too. Back to the train station please.

The train left the station and not a bus. This was weird as it was last time. Th car I was in was a first class car, you could tell because there was a piece of fabric on the hard plastic and not just plastic. As we stopped at the stations the car began to fill up with everyday people, not the tourist or suit and tie type who would pay for a first class ticket. Then burned out drunk r junkie white guy got on the train and started playing his guitar and singing. He was so bad, I wanted to pay him to leave out car. He had his hat on the floor t collect tips and some idiot put coin in it. This only made his sing louder and a second and third song Some young women got on from a day at the beach and were laughing their asses off at him and then clapping exuberantly which only kept him going. You’d think that his empty hat would give him a clue, but t was not so. Finally the Gods interceded and he broke his G string, and peace was again in the world.

The car was packed t standing room only and a troupe of kids came in dressed like Zulu warriors accompanied by an adult playing the drum. They were doing really nicely and then the Transit Police entered the car and suddenly we were left with an empty car. Another African magic trick.

Train arrived at Cape town, I still had my iPhone and camera. I found a beat up taxi and knew he wouldn’t know where my hotel was, asked if he knew it. He nodded yes. Really? Yes. Okay, I was prepared for a tour of the city again. One left, another left a long straight a left and a quick right and we were at my hotel. Unbelievable.

Posted by Dorothy Macaw at 9:05 AM