The Great Train Robbery of 2016

The front desk suggested that I take the train. Cool ! I like trains. Go out to the corner turn right and walk till you hit the station. Simple as that. Walked up to the ticket counter and had two choices. One way or round trip? First class or cattle class. Heck I’m on vacation, First Class, round trip please. Okay that will be $2.25. Shit I knew I should have gone economy. 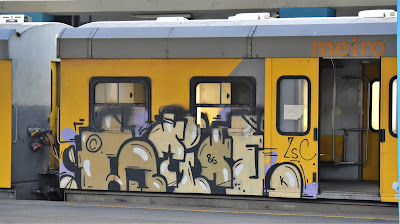 The train was on time and my seat was comfy. As we were pulling out of the station and rolling slowly along everything was topped with barbed wire. I thought the west was won with barbed wire, but South Africa has kept it alive. Since that was such a good line I thought I’d better make a note of it on my phone since my sieve memory is working overtime with all these new experiences and senses. With a minor case of ADD if I don’t write it down it might get lost, don’tcha know?

I got as far as ‘Barbed wire tamed the wesr’ when a pair of black hands grabbed for my phone. Since I am not a thumb texter I had a good hold on the phone, so pulled back, he pulled his way harder and like Penn and Teller my phone was gone. I saw the guy run out the door as I sweetly called “You Mother Fucker!!!!”. He was hightailing it to the gate and people started after him. Like a Springbok he leaps the turnstile gate and was gone down the street. I’m thinking, crap, now I have to change all my passwords what a pain that is going to be. I have travel insurance and homeowners insurance, I wasn’t so worried about the actual phone. I was about to re-board the train with an expensive lesson learned when some of thee people said ‘They got him !’ The Transit Police had him cuffed behind his back and he had blood on his face and as he was walked trough the crowd people were still swearing at him and hitting him.

They handed me my phone back and asked if I was hurt, did he cut me? I had a cut on my thumb, probably from a finger nail and my adrenalin was high, but otherwise I was good, the phone was good and Mr. Smith wasn’t so good.

The lady Transit Police officer asked me if I wanted to make a police report. I didn’t really think it was necessary. Mr. Smith probably got what he deserved and except of a small cut and blood on my phone I was as good as new. Then I thought, the worked really hard catching this guy for me, and if I said no, there would be no paper trail showing their efforts. I asked her “Do you want me to make a report?”, she said yes.

We all got back on the train, Mr. Smith probably had his first First Class train ride that he had ever been allowed, but he did have to sit on the floor surrounded by blue. I kind of felt sorry for him, when he ran with my phone he dropped his goody bag full of other purloined goods, I mean he really didn’t strike me as the French Press coffee maker type or someone who carries around his cable TV box. E got the snot kicked out of him. He was sitting on the floor crying and his nose running. I thought about handing him a tissue but it wouldn’t have done much good with his hands behind him.

Everyone on the train was curious as to what happened, if I was injured. I really felt genuine concern from them not just idle curiosity. One lady was getting off and handed me two pieces of Halls throat lozenge.

The lady Transit Police filled out her notebook and several stops we go off to go to the actual Police, police department. I couldn’t have been treated better. I was orally interviewed by A Warrant Officer (sorry I forgot his name. Over??) and then the dreaded written statement. The officer explained since I would be unavailable to testify in court, the guy would probably go free, but perhaps with the Warrant Officer’s telling of my statement in court that might hold up. I felt “No harm, no foul”. He got smacked around, he cried, he’ll get a day or two in jail before he get out of his own recognizance. That should be enough for a failed snatch and grab.

I left the police station to get my train on to the penguins. On the way I gave a taxi driver about fifty cents for a cigarette. If any day is a cigarette day it is today. Then one of the female officers called me back and said I needed to sign for receiving the evidence back, which totally made sense.

As an aside : I just got back from dinner and was telling this to the taxi driver and he said it might have been luck the Transit Police got him as quickly as they did. Sometimes mob justice takes over and the perpetrator is killed. 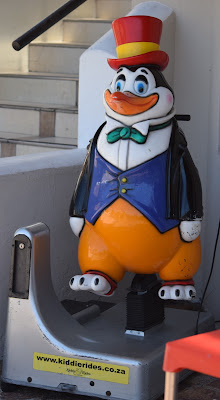 Back to the narrative. I got on a later train and met a very interesting man. Lots of thoughts on lots of things. He was informed and funny. He said that he hadn’t had a television in two years. He said if it was good for you, America would have banned it years ago. Near the end the train turned into a bus. Rail repair it seems Then to a shared mini bus to be dropped off close to the Boulder Beach area where the penguins reside. A walk of a few blocks down hill and I was there. The wind was absolutely howling. I had been carrying my hat since the train, when it tried to go on it’s own walkabout.

The Boulder Beach guesthouse and restaurant are conveniently located on Boulder Beach. I stopped in at the restaurant for a mid day bite. Their ‘light menu’ had fish and chips and that seemed appropriate for a windy day at the beach. The fish was huge. Half of and entire fish battered and fried. It was really good, but I’m currently only eating half the serving, except dessert, because of all the food I was served in Namibia.

Then down to the penguins. You can get real close to them at this location. The location where the tour buses disgorge their passengers are elevated wooden walkways. This one was just beach, sand, water, rocks and Penguins. Oh ! A smattering of people too. I spent an hour there watching the birds, finding a critter with babies in the bushes and hiding from the wind. I had given some thought of going to the southern most point of Africa, but it would have been a hurricane. 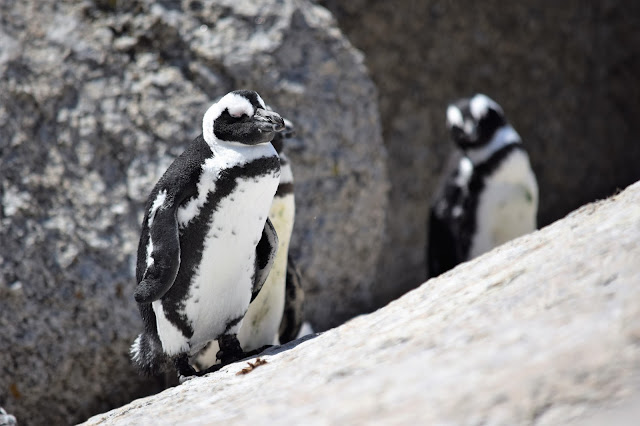 I trudged back up the hill to the main road. I never got hit, but I kept looking the wrong direction when crossing the road. Soon enough a city bus came by and I was whisked away resplendently out of the wind to the train station.

The tracks must have been fixed because a train arrived in fifteen minutes. Cape Town here I come.

Back in Cape Town I exited the station and headed back to the hotel, only nothing looked familiar. So I got a cab and told him the hotel’s name and the hotel’s address. The Bozo couldn’t find it, he asked other drivers who told him to buzz off, he asked at a gas station. Finally he phoned a friend, being out of all his lifelines and we drove back to almost where he picked me up and zig zagged thorough a street or two had me at my hotel. With all his screwing around the meter was by American standards, not too bad. By Cape Town standards he was robbing me. I bitched and got a somewhat discounted rate.

Back at the hotel I was informed that the elevator will be under repair from 10pm tonight and for the following thirty six hours. My room is on the seventh floor. Luckily I’m changing hotels tomorrow.

I wrote a little bit and then had the hotel call me a taxi to take me to Panama Jack’s restaurant. A shack on the shipping docks that is supposed to have the best seafood in town – and – Abalone is on the menu. They were booked solid so I had to sit at the bar. Since Abalone is sold by weight I asked the barman what a serving weighs. He left to check and came back and said they had no Abalone. Crap! I ordered the scallops appetizer and he returned fifteen minutes later and said they were out of scallops. Okay, how about the Avocado mixed seafood salad? Sure enough he came back and said the Avocados weren’t ripe. By now I’m kind of running out of options on the appetizer part of the menu. I ordered a Greek Salad, expecting him to return and say they were out of Greeks. Instead he puts the Avocado Seafood salad in front of me, minus the Avocado.

Since the Abalone was out, I asked about the grilled tuna. Was it a steak cut or a loin, knowing the loin is going to be as close to sushi grade as I’m going to get. It was loin. Great I’ll take it. It came, it was steak.

Maybe today is my Karma day for saying all those things about Doug. If so I hope I’ve reset things a little.

Tomorrow was supposed to be Table Mountain, but it might be closed. It was closed today because of the winds and it doesn’t sound weakening any as I type this. Well a little after 10pm time to bed.

Posted by Dorothy Macaw at 7:07 AM