Too many tourists and too few bathrooms

No calamities in the last two days. It’s been so, so boring.

Breakfast in the 17th and then a short walk from the hotel to the District 6, museum. District 6 in now a combination suburbs, retail and municipal. Prior to 1966 District 6 was a reasonable cosmopolitan blacks area. But since it was close to the white center of town, Apartheid said the racial mixing would cause disharmony so the blacks had to go. Still a segregated country the resident of Division 6 were forced to move and then their homes were demolished by bulldozers. It reminded me of my own country’s relocation of U.S. citizens of Japanese ancestry in the early 1940’s. Similarly both groups were paid pennies on the dollar/Rand or their property loss. I wandered to halls and looked at the pictures and read some of the stories of the former residents. Nothing really new, same stories, different dates and different locations. I left knowing more, but not particularly more educated.

Earlier I has eschewed an offering of a city map by the hotel, but soon realized I had no idea what was where or what for that matter.

The map gave me a few ideas on where to go and since it cost me nothing also in HUGE letters and primary colors, where to buy the best gemstones. I saw a large star shaped object called The Castle. It looked similar to the footprint of forts used in the American civil war. It looked close so, why not ? 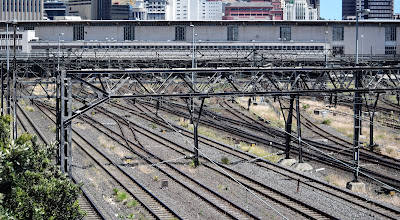 I did find it after crossing several busy streets. Always with the traffic light with the little green man brightly lit. I still haven’t gotten used to looking left when stepping off the curb and right when in the middle of the street. Its been close a time or two. I found the Castle with no problem and began to walk around it to find the entrance. There was a road leading to what appeared to be employee parking, so I continued along. Around a corner and down a long block. Around another corner and then the sidewalk began a slight incline. Soon I was on an overpass overlooking the Castle and no way down. Hey must have been hiding the entrance from me. Winston Churchill said “When going trough Hell, keep going”. I certainly wasn’t in Hell, but I kept going anyway. Next to me were dozens of railroad tracks, so I must be near the train station, then up ahead a large lot full of shared mini vans. Yes, the train station, now I know that one !

I passed by all the mini vans and saw the sign for the train station. Inside it was completely different from yesterday. There were a few ticket kiosks and several placed to enter the tracks and no one was there. I mean no one. A huge empty cavern of a place and no one was there. Slowly I realized I was one floor above the main floor. Piece of cake, all I need to do is find the stairs down to the main floor.

I walked up to the first open ticket seller and asked her how to get downstairs. She said I could go outside and get knocked around be the wind on the pedestrian overpass and go down there. Or I could go back the way I came passed the piss smelling corners and mini vans. AND, I shouldn’t be there alone, she’d call and get me a security escort. I told he no thank you. She insisted. I mean I had just walked through the winos and street sleepers and their pee’d in corners to get here, surely I didn’t need an escort in an empty chrome and marble transit hub. I thanked her for her advice and went and forded the pedestrian overpass. Once on the street with fingers turning white holding my camera close to my body and head swiveling like a bobble head I made my way through the crowd with my best “Don’t F with me” walk. 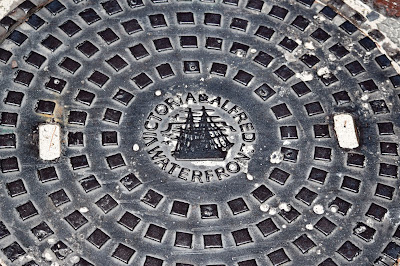 Finally a taxi. He knew where my next destination was, the Victoria and Albert dock area. The guy was from Zimbabwe, like yesterday’s meandering taxi driver. This was not starting out on a good note. Not to worry, the V&A is a huge tourist area and everyone knows where it is. Along the way I hear how poor things are in Zimbabwe. How he does a bank transfer to his mother and the bank in Zimbabwe doesn’t have any cash to give her. Then we need t stop for gas because he doesn’t know if we’ll make it to V&A. Once gassed up we are driving along and the car coughs and shudders to a stop. He gets out and opens the trunk to get the key that unlocks the hood and does what everyone does. He unscrews some caps, bangs on something, shrugs his shoulders, closes the hood, puts the key back n the trunk, gets back in and starts the car and we drive off. Somehow nothing else go in our way and we did make it to V&A. 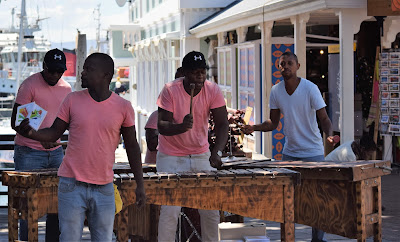 What a tourist trap. All I saw was tan pants, yellow shirts and whit sweaters tied jauntily around the men’s necks, all the women were in clothes with designer’s names or initials on them. Thousands of faces and none of them black or even mocha. Well there were some, bu they were all carrying trays, taking orders or selling something. The remainder were whiter than a bag of marshmallows. Not a piece of paper on the streets, glass and chrome everywhere. This was not what came to Africa for. I was about to run away from this mass of consumer insanity and then the sign – Life is too short for bad coffee – beckoned.


I had an iced tea (in a can) and a chicken burger Both were surprisingly tasty. The sweet potato chips (fries) were soggy, but the burger was near perfection. Due to my post safari promise I left half behind. Paid and left a US. Percentage tip, waved to the waitress and left. Twenty feet later the manager ran me down and handed me a doggie bag of the rest of my meal. I’m staying in a hotel, I don’t do leftovers.

A taxi got me to my hotel and then to the new hotel. Then the new hotel had the nerve, the nerve to tell me my reservations were for the next day and they had no rooms available. What the nerve of them manipulating the calendar that way ?!

They did manage to find me a place nearby for the night. I’ll be back, tomorrow.

The new hotel is a Marriott brand and is clean and big. It is not impersonal though. Room secured, Wi-Fi abysmal in the room, but great in the bar. What a bonus. I sent out like seven or eight days worth of blog entries and then had dinner. A nice hotel dinner. Nothing special, but it was palatable.

Morning came a long hot shower and Starbucks instant got the world off to a great start. Big hotel breakfast. Not a big breakfast, but the same breakfast you see in big hotels. Egg station and a mile of hot dishes and half a mile of cold dishes. 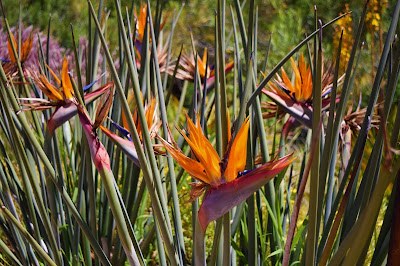 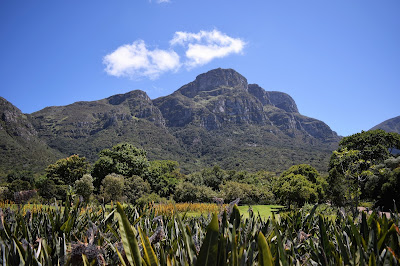 The woman at the front desk said the tram to Table Mountain was probably not running due to the continued winds. As an alternative suggested the botanical gardens and a lunch spot with a view. Sounded good to me. She called a taxi for me,, and the darned thing came with the hotel’s logo on the side. There goes and additional 30%. The gardens were nice. Established a hundred years ago and many of the plants had a sign telling if it was over a hundred. A free walking tour was starting in fifteen minutes. The presenter was a volunteer who was plant crazy. I suppose you don’t take a volunteer job giving free tours if you weren’t crazy about whatever your topic was. I enjoyed the tour and the time I spent there. The high point for me was the Boomslang (named after one of Africa’s poisonous snakes) walkway. A long twisty walkway in the tree tops that is supported at noth ends but the center is unsupported and maintains it’s integrity through he way is is built in a series of S’s. It was a little wiggly in the middle buut that only added to it’s magic. Finding a toilet was a bit of a chore and full of directions like a general direction hand wave or an “Over there”. Astronaut diapers would have come in handy here.

Information flagged a taxi down for me and I told the driver my destination. He’d never heard of it Phone a friend time. A sentence or two we were on the road. Me hoping the friend wasn’t from Zimbabwe. We arrived at the Cecil Rhodes memorial of Rhodesia (AKA Zimbabwe and Zambia) and colonization of southern Africa. Way, way up a hill in a quiet park. I got out, closed the taxi door and heard it drive away – thinking how the heck am I going to get back? Guess that’s something to worry about later. 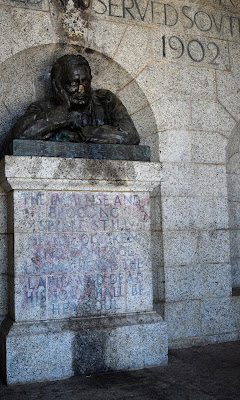 Found good old Cecil’s bust. I’m not too sure, but maybe the pee stains and his nose broken off says something abut how well some of the citizens of Cape Town think of him. The view was stunning. Overlooking the entire city with the Indian ocean to the left with bright white beaches and breakers. The cafe that the desk clerk suggested was a short walk uphill. Good food, great view, canned iced tea. What the heck, this used to be owned by the British, can’t they make tea, water it down and toss in an ice cube ? This time at least they asked if I wanted a doggie bag and didn’t just pack one up without asking.

The cafe was able to call for a taxi for me. While waiting for the taxi I heard the call of a bird. I don’t know what it’s name is, but I recognize it’s call. Some say it is calling ‘Work harder” and some think it is “Drink lager’. A ride to the old hotel to get my luggage and to the new hotel. The new hotel’s room is twice as large as any I’ve been in this trip. It is huge, balcony. There is a bar below but I haven’t tried to sleep yet, it might not be too bad.

Dinner at a Mexican restaurant that was as good as any American Mexican restaurant. Even a decent Margarita. The house was mad. It was like Free Drinks night at Azteca. The only place t sit was at the bar. I have had “Mexican’ in other countries and it never came close to what I was used to. This one lived up to and exceeded my expectations. It was like they had Star Trek transferred a Los Angeles Mexican eatery and stuck it on a hill in Cape Town. I broke me ‘only eat half’ and Hoovered up everything. 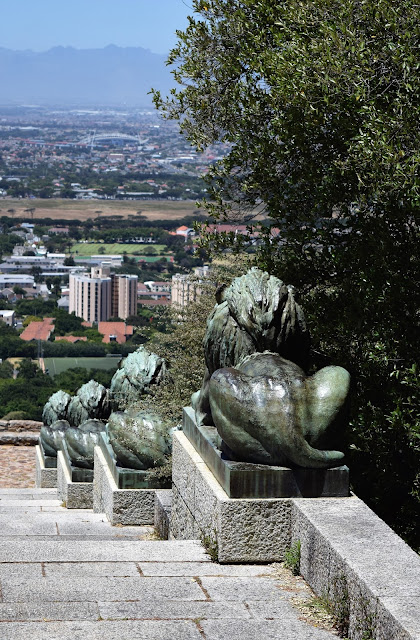 Now nine pm, time to shut this down.

Posted by Dorothy Macaw at 7:50 AM