.. and I didn't even get kissed

Well I got here. A bit more adventure than I prefer but I’ll try to remember to be smarter next time.

The big bird got us from the beach to Sittwe like clockwork. Luggage in hand I step outside and someone says Taxi?. – How much ? (Too much, no matter what the cost) – So we negotiate from private taxi a/c to mini van. – You will drive me in the van? – Oh, yes! – OK, let’s go!.

We start walking away from the taxis, off the airport property. Alarm bells tinkle in the background. He throws my bag in the back of a multi passenger tuk-tuk.. Whoa dude !! I take you to my car. CLANG ! CLANG ! CLANG ! Alarms, and I keep on going with it. We go way the Hell onto town and he dumps me at a shared taxi stand. This is not what we talked about, but now I’m stuck. – then the price negotiation begins, Mr. Lying Sack of Shit inflating the price as the driver and conductor just sit back. Finally a price at least 4 times what the locals pay is agreed on. Then Mr. Lying Sack of Shit demands $3.50 for driving me there. He’s getting his bite out of the taxi fare. Finally I toss two bucks at him and tell him to fuck off or call a cop, and sit my Princess ass in the front seat.

Then the driver start hunting for one more passenger and I look at my co-riders and tell the driver, Let’s go, What I paid I OWN this taxi. The other agree with me and we are off. Different countries, different rules of the road. Here it has a method, until the sun goes down. Then the rules are drive with your high beams on, or dive with no lights at all. When you first get your new bike, be sure to remove that little red reflector in the back, and wear the darkest clothes you own. This will insure that the other drivers are paying close attention to the road.

The road was muchly paved. I wont say mostly. Lots of construction and mucho dust. We crossed two bridges that scared the heck out of me. I’d be leery of walking across them, and we are in an overloaded mini van. The three hour trip took four and that was with diving crazy fast on the paved parts.

We finally pulled into Mrauk U a little after seven and after dropping off everyone else got to my hotel. I’m not sure if that was because it was the last stop or they didn’t want the other passengers see how much they gouged me. (I found out today it was 10 times)

The Vasselli is the best of the worst in town and there is no middle. By saying that I am being generous. One look and I knew I was only staying one night. Low twin beds on homemade frames. The a/c behind the window curtain . No dead bolt or even chain on the door that you had to close and latch then lift got the tongue to fall into the hole in the jamb. The a/c didn’t work and the fan was good, except the bugs ate your exposed skin because it was too hot under the covers. I want to say I’ve stayed in better jails, but I’ve only stayed in one and it wasn’t.

The guide I chatted with arrived and we left the hotel and I told him to take me to the best (only) hotel in town. As I said there is no middle ground. It is a palace. I spoke to the manager and he said walk in price is this, but I can give it to you for that. I said Agoda.com has it for such and such, he said okay. So new home after one sort of sleep. Then we went out for dinner. The guide said he wanted to go to the Mortuary. Okay maybe they have converted the old British mortuary into a plush eaterie. Not sure about the atmosphere, but if the food is good, why not?

Turns out it was a local restaurant called the Mo Cherry. I ordered the Cashew chicken and it was eatable, but nothing special and certainly not nearly as good as MarMar’s.

Dawn came, breakfast came, I tossed money to the desk clerk in a snit (not my proudest moment) and guide with car came.

Today is the city temple tour and tomorrow is the Chin village tour. I’m not sure why I need to see the Chin villages but the guide says, see them now before they disappear. Okay, I’m not sure if there are only here this week, or getting flooded out by global warming or too many tourists, but they are going to disappear soon and this is my last chance so there it is.

Mrauk U is one of those fr from the center of power. A small forgotten backwater on the map of modern Myanmar. I it wasn’t for the temples, and the light tourist presence I’m not sure there would be a hotel or restaurant certified for foreigners. The streets are unpaved, full of potholes and not wide enough for two vehicles to pass by.

Today was a temple tour. The temples here are a few hundred years newer than the ones in Bagan,

and absolutely totally different in style. In Bagan the Buddha’s are maximum of four per temple, at each or the cardinal points on the compass. Here there are a zillion of them one says it had forty thousand and another ninety thousand. You walk down long cover hallways lined with Buddhas, little ones, big ones tiny ones. Some carved into the stone, some varied sized statues posed from knee high to over your head. The hallways are all well lit, but if the lights were to go out, you’d be in a hard way to find your way out. This is not a temple tour for the claustrophobic.

In Bagan all the temples and pagodas are on this large flat plain. That is why the horse cart works so well there. Here we are in the mountains and everything is up. Guess what, it isn’t any cooler here than it is anywhere else in this country. Want to see that temple, climb up those stairs. Want to see that stupa? Do the same thing you did for the temple.

Eventually temple overload landed and it became a bunch of meaningless names and dates. The temples began too merge into one overheated set of stairs and the date ? Well crap, I can’t keep American history straight Burmese history from the 1500’s might as well be spoken in Chinese for as much as sticks with me. Maybe when I look at the pictures it will clear up a bit. 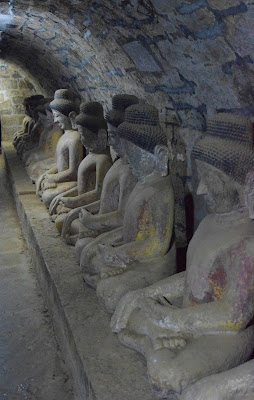 A break at noon until 330. Got the new room, in the new hotel, it will do nicely. Wash up a little, power nap and back at it at the appointed time. This tie it was just a few temples. Where this morning I saw perhaps a total of six other tourists, this afternoon they were in abundance. At one checkpoint in a temple there was a covey of them, maybe six. They wanted to shoot down this hall that was lined with Buddhas. First aunt Martha took her two shots, then cousin Wilbur, then sister Betsy, brother in law Pierre had to shoot with cell phone, SLR and iPad. They wouldn’t let anyone behind them and it was beginning to back up a bit. I am sure glad I didn’t say something like Dude, how about giving the rest of us a break ? Oh, shit ! Maybe I did. Either way it wouldn’t / didn’t make any difference, until Sophie got her’s too. Perfectly framed don’t you know.

The problem with the guides is they seem to all run on the same track as the other guides. We’d run into this group and the stink eye would fly, in both direction. Did it do any good, of course not, but it did feel good.

We ended the day with a mid sized hill climb to watch the sunset. I may have tweak them a bit, but I think the photos should be nice.

Now at dinner I ordered a salad and just got a five alarm chilies. Gawk! One of hose small teeny green ones. I’m going to need an antacid. 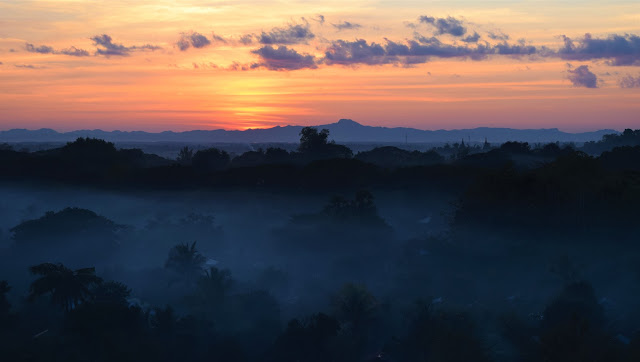 Posted by Dorothy Macaw at 4:18 AM