Away from the heat for a day

I woke up yesterday to that old Mexican saying. “Mi microbe es su microbe”. Not horridly, just enough to know that the Myanmar microbes were not being friendly with the US microbes. This and knowing that we had a full day on the road set my alarm bells a changing.

After a light breakfast I met the taxi at the appointed time and we were off to a hill station that served as the British summer capital during colonial days. Sitting at about 3500 feet it was a way to get away from the oppressive heat of Mandalay. Heck for me it was a joy to get away from being a water fountain. I have heard that you are in trouble with dehydration when you stop sweating. I can promise you I was never in any danger of doing that.

We started on our way trough the city streets and perhaps hour we were driving through the countryside. Jojo said the same thing we all say. My grandmother aid it, and I’ve said t too. “Twenty-five years ago this was farming (forest, desert, ruins – take your pick).”

He was munching on small nuts from a bad and offered me some. There were whole cardamon seeds. I had never thought about them as anything besides a spice for cooking. Not sure I’ll change my mind but I might give it a taste when I get home.

The road was sometimes good and sometimes bad and occasionally not a road. It was one of those car killer roads. Not only was the tarmac in spotty condition it was also a slight but continuous climb. One of those roads that you see cars on the side of the road with their hoods up panting from the heat. We made a pit stop to let the taxi do just this. Kill a little time before there are problems. 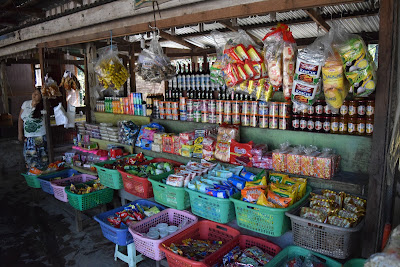 A little shack selling local jams and dried fruit. Grape wine and whiskey. Chips, cookies and candy. There were also cellophane wrapped star shaped circles of round things stuck together. Off to the side there was a woman making them over an open fire. She had a he wok with hot oil over the fire. To her right was a bowl filled with powder coated round things about the size of my little fingertip. I figured they to be Chickpeas dusted in flour or maybe something sweet. I found out it was rice flour. She’d take a small handful of then and place them on a small round ladle and they formed a circle. He would lower them into the oil and let them rest and then release them and pick up one of the floating ones and set them aside to drain. At home I’ve baked them as a crunchy treat, this might be a new addition to that theme.

Back on the climb, past private toll boots and government toll stops in the middle of nowhere. Trucks, buses, motor bikes and cars all vied for their position on the roadway amidst the diesel fumes and horn honking.

When we got to town it was expecting a Hill Station, meaning a perhaps train station sized biding. Instead to was just a normal Burmese town. We drove past the Anglican church that was in need of some deferred maintenance. A few of the former English mansions had the equivalent of blue tarps on their roofs.

After a short bit we arrived at our first stop. The national gardens. A nominal fee and a ‘Go that way.” and I was in. The gardens were really spectacular. Green, green grass. Lovely contained flower beds. A sparkling lake with geese and swans gliding across. It was a Sunday of a three day weekend and it was packed with families and couples. Young couples off by themselves holding one another close. Large families on the grass picnicking or posing and having group photos take. A few young soldiers in freshly pressed uniforms with families. The families beaming to be with such a nice young man. 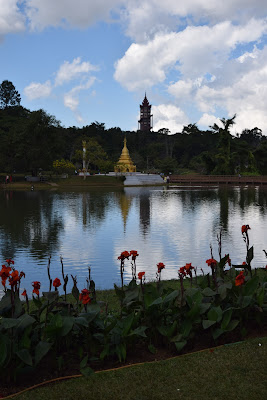 Oh ! And me. I was the only European face that I saw the entire two hours I was there. I strolled the rounds taking a picture here and there. I slowly made my way across a bridge to the side of the lake that had a walk through aviary, It was closed. I only got a glimpse of a Horn bill and a cage of Cockitils. Well I guess I’ll mosey through the elevated forest walk. It was closed. Further on the butterfly and orchid exhibit was open, for a fee. I Was more interested in enjoying only sweating moderately instead of seeing parasite flowers (darn Google turns out they aren’t parasites after all, ruined a good line) and probably dead insects.

I made my way slowly back to the taxi. Passing people and almost always having a beautiful smile returned by both men and women. As we were driving through town we came to a huge parade. Music blaring from truck mounted speaker, followed by huge garland covered signs. Behind the sign was a parade of maybe a hundred young women. All dressed in their absolute best embroidered silks. Not a hair out of place. I was thinking it must me a beauty contest. The taxi driver told this was their last day and on their way to become novice nuns. Yowzers ! That was a shock. Then looking closer I noticed they all had their rice bowls clasped in their hands.

I see monks and nuns all over the place. Rules, rules. Hey get preferred seating on buses. Women can’t touch monks without giving them cooties. If you donate cash to them they can’t touch the money. There must be dozens more I am unaware of. With all this I sometimes forget that they once were normal, everyday people before they became monks and nuns.

Driving through town there were horse carriages for hire. In stead of them being drawn by two or four in the British tradition. There was one lone pony to pull these monstrosities. Close coaches like small, very small stagecoach. All designed by some Acid Head who thought he was in London in the 1800’s. Garish and tacky are he words that come to mind. 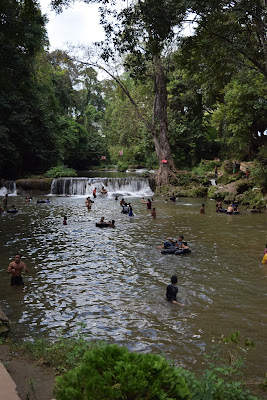 Next stop one of two waterfalls. One easy one, one easy to get to and not so easy to leave. I didn’t like the idea of walking downhill for forty five minutes and then having to come back up. I mean I don’t want to miss my plane going back to the states in a couple weeks. So the easy one it was.

They were full to overflowing. Sunday at the local pool with all the expected madness. Mostly young men and some girls in the water below the falls having a grand old time splashing and generally having a wonderful time. The weren’t spectacular, but the were cute in a miniature sort of way.

The road wound around and lead to another set of lower falls. The only across the rive I 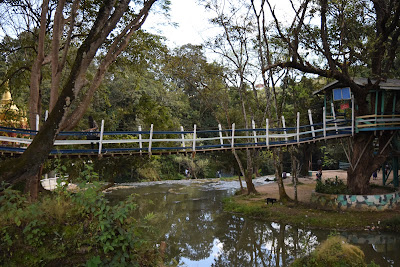 could see was a suspension bridge over the fast moving water. It looked okay from a distance, but once stepping on it, I became this would not be covered by my travel insurance. It was wobbly and built with left over timber from some construction project. The middle of the bridge was swaying like a Hula dancer’s hips. At the landing on the other side was a vertical stairway that nearly everyone had to scoot down on their butts.

The lower falls were a disappointment to me, with a concrete enclosure to create a pool and the Merry-Go- Round kind of like the idea of a waterfall among nature.

Next stop a temple on top of a hill. Then first moon of some month they have a hot air balloon festival. Not human sized but instead rice paper and candles. One of the significant things about this spot is a guy commissioned this Buddha to be carved and exported to China. Along the was it fell off the truck and try as the might Buddha didn’t want to get back on the tuck and go to China. So he had this Buddha schlepped up here gave it to the locals. The local people donated money and jewels to build the pagoda around this miscreant Buddha.

A short stop at the recreated English Governor’s Mansion, where they wanted $5 to walk thorough it. I decided to pass on that, besides it was getting late and I ha several packing, moving things to do before the morrow.

The drive back was longer than the drive up, but that was only because of a half hour roadblock.
Posted by Dorothy Macaw at 12:01 AM