Today was the planned trip to the Chin villages. Eight am meet up. I had showered and done all those morning things and was a bit early to meet, about twenty until eight. Then something said, you better go back to the room now. Walk regally like the princess you are, don’t hunch, and don’t run, Just purposefully stride back to the room. Keep repeating, there is no hurry, there is no hurry. There was a hurry. Damned chillies! 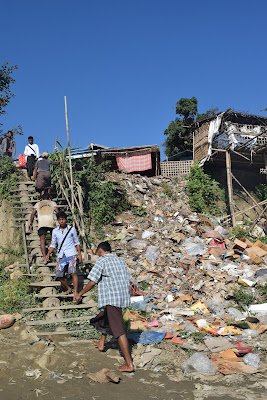 We got on the road on time and I wish the guide would realize that 8 is too late to start, but his is a railroad like timetable he has to keep. Rutted roads, paved roads, roads under construction, rutted dirt roads under construction. We got to the landing to pick up the boat. To get to the boat we had to walk down a near vertical ladder If vertical is 90 degrees this one felt like 85 degrees. Not steps but 2x4s.

The boat is about a shoulder wide, well … okay two shoulders wide. Long as a Winnebago. Powered with a lawn mower engine with a propeller on a stick. The deck chairs are lined in a single row and are only good for one thing that is to lean back and take a nap. If you want to take a picture you have to lean up. If you want to take a decent picture you have to scoot up. If you was to stand you have to really scoot up and then lean forward and rock for momentum. If I had my way I’d burn everyone of them, and send the smoke to Hell to torture those souls.

The river was very wide and must have been shallow until about the middle of the channel. We got going and cruised along at 2 miles and hour for about an hour and a half. All the time the river banks were closing in on us. I know it is the wrong country and the wrong river but if I had seen Colonel Kurtz I wouldn’t have been surprised.

We set ashore at a small village and I asked what the deal was with the Chin. He said it was the ladies 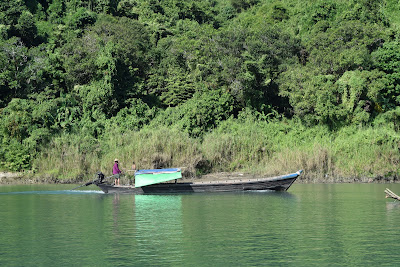 with the spider faces. This didn’t sound optimistic. First the mortuary for dinner, now spider women. They weren’t really spider women, only tattooed with intricate facial designs. They stopped the practice about 50 years ago, so the women would all be grandmothers by now. Around age nine they would get their tattoos. A five day process of a full days having the tattoos made. They would wrap the girls in a bamboo mat and tie is around her, to keep the girls from squirming around too much. At the end of five days she would be puffed up like a basketball and had to drink special ju-ju (okay, I missed that part) for a month. 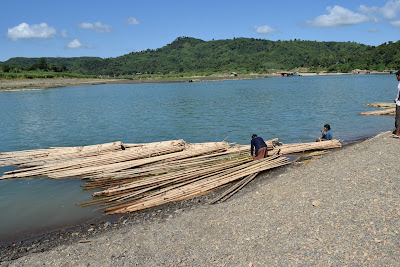 The lady I met here was more than willing to let me photograph her, I felt like I was intruding and popped a quick snapshot. We walked to the end of the village to the school. Both primary and more than primary were both teaching English in some way. The primary ha milk, cake, bread written on the blackboard. The more than primary was taking a quiz. Written in English on the board “What is – name – eating, What is – name – riding?” It wasn't much of a test, I knew all the answers right away. Schooling goes until 5th or 6th grade and then if you want more you need to go to the city, and that costs money. So most of these kids are going to top out on Mar-ling riding a bicycle and Hello and good bye.

On the way out of the village who should we run into going in, but that obnoxious group from yesterday. I tried Good Morning, Gutten Morgen, Bonjerno, Ces’t Va - nothing in return. Maybe Shalom, Salam or Aloha would have worked, but I think more than likely they were just being poops.

Back to the boat and came and closer to Colonel Kurtz we come. We get to the end of the road for powered vessels and only bamboo rafts coming down to this point. Small rafts of bamboo, get tied to other rafts, to other rafts and after a bit there is a floating barge of bamboo to the big cities down steam. We walked this village and sat with a woman and her eighty year old sister. The lady we were sitting with was one hundred and three. She was deaf but told the guide she was just waiting to die. It sounded like she wasn’t eating enough to keep a bird alive and her kidneys may have shut down. I’d gotten a little less shy and took a good picture of her. I haven’t looked to see what is on the memory card yet. I hope I did her right.


Than came three hours of torture, back down the river, and not just to where we got on, but further still because it was easier on the car. The sun was low in the sky after the first hour and even on the water a flipping oven. I’m chanting to get off and we pass the stating point and keep going and going. At about 430 we land and guide wants to climb a pagoda to watch the sunset. I wimped out can came back to the hotel. Just too much fun for one day for me. 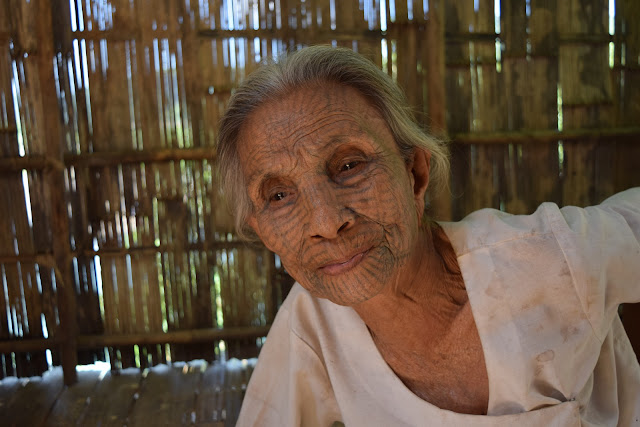 Posted by Dorothy Macaw at 4:30 AM