Everybody laughs at farts

Before dinner yesterday we went out to climb yet another temple to get a better view of the sunset. I don’t know what it is with these vacations that require seeing the sun set. It is just in the vacation laws I guess. I what people do when they go to Alaska in the winter for the required sunset viewing, or worse in the summer!

possible in a temple. The designers of these temples must have had stork legs and mice feet. The steps inside a temple are sometimes a six inch rise and then you’ll hit an 18 inch rise and the steps are never wider than the ball of your foot. Of course they also failed to put any sort of windows or port holes to let in some light. I’ve taken to climbing up feeling my way with my hands, both up and down. It isn’t graceful or appealing to look at but it is better than teetering on your heels gong down, hoping there is a fatter person in front of you to cushion your fall when you all act as dominoes and fall.

After sunset we clip clopped back to Casa Bobo. The horse got the rest of the night off and we went to dine with the family. Well that was my plan. Their plan was a table set for one with a candle and mounds of food. At east this time Bobo sat with me while I ate. The food was again outstanding. I found out that the meal was prepared by his daughter and supervised and tasted by his wife. Some crunchy things that reminded me of bacon was chicken and I didn’t ask any further questions about that dish. Some pork in oil, and chicken in oil, finely chopped vegetables, and a spinach type green leafy dish. Of course a heaping helping of rice. I may need to buy two seats on the plane home.

Since the horse was resting we motorbiked back to my hotel, after securing from me a confirmation of dinner the next night. Cripes I haven’t paid for a meal here since the first night. I did tell them I wasn’t the queen and would not be eating and served alone. We will see how the seating goes tonight.

Morning came early, 4 am wake up for 5 am saddle up and a 530 temple climb for – yes you guessed it – sunrise.

I think that 5 am is early for anybody. This morning’s ride was no exception. If it wasn’t for a big cup of Starbucks instant I’d have been asleep n the ride out. We got about two blocks down the main road and the horse let out a thirty second stream of farts. Not only was it loud it was also long. I looked at Bobo and we both laughed. I hope we didn’t embarrass the mare too much.

I looked up at the stars, totally clear and bright. Not much light pollution once you got outside of town and my sunglasses slipped off my head. Do yo know that the light on your phone is pretty worthless to find dark glasses, on blacktop, on an unlit country road? I did find them but it was shear luck

Today’s climb was on the outside of a temple. The first tier was a little easier angle and much more even steps up to the first landing. I mean you could fit half your foot on them even! Now the next tie they decided that your foot must have shrunk on the way up because it was back to the ball of your foot only steps. A hand rail was never considered, at least when you were inside to had the walls to used as a touchstone, here was good old Myanmar air.

I ladder climbed up one more tier and decided it was good enough. There was another tier and a half but I assumed the next tier would be big toe wide and the last half toenails only. 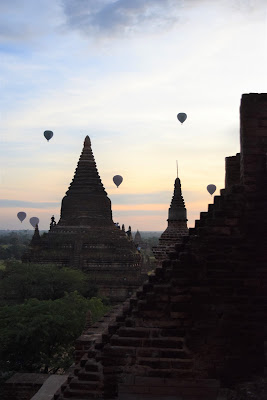 The sky was still back lit by starlight and just a toenail of a moon in the sky. Slowly the sky lightened and began to change colors and the temples in front were back lit with reds and pinks. Off to the left were large humpbacked things off in the distance. One of them lit up and I realized they were the hot air balloons getting inflated for their morning flight over the temples. I’d love to try them sometime, but am too cheap to pay $300 for a ride, even if it does include Champagne at the end of the ride.

The sky became brighter and the balloons came closer. I was alternating between shooting with my Nikon and sending instant messages and photos with two friends back home. That still astounds me.

Then it was face to the temple and butt to the world as a monkey climbed down the tier I was on. The main set of steps I sideways crab walked down them and back to the cart.

We haunted a couple more temples, by now one was running into another and we stopped at one and I was going to 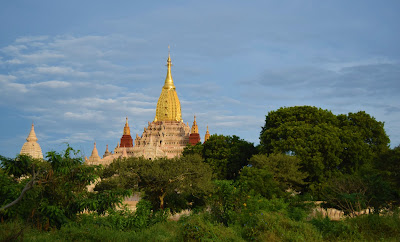 tell him we had already visited this one, but Bobo was working on the horse so I decided to go look at the darned thing again. Whoops! This was a totally new one to me, well the outside looked like we had been here before. I knew then it was time to end my temple raiding and return to camp.

I had given some thought to staying here another day and going out of town to see what was around, but started counting days left an factoring in travel time I am not so sure that time would allow for that. I came here this time primarily to see Murak U and it is one o those places “You can’t get there from here”. One travel agent said I’d have to go to Yangon (Rangoon) and then fly up to the nearest big city. That would be like flying from Chicago to Dallas to get to Helena Montana.

I knew that a flight went daily from a beach resort town and that town was just over there, just over that mountain. Well maybe a little further than that, but a flight there would bypass Yangon and I could spend a day drinking Mojitos on the beach. That sounds like a nice reward for getting culture for three days.

A stop at a travel agent on the way back to the hotel and plane ticket from here to beach tomorrow morning was secured.

I read a tale or saw a television show where a woman was attacked and when her lover found her she said she wanted revenge on the attacker. She could remember him clearly. They drove around and she yelled “It’s Him !” and pointed at a man. Then guy stops the car and kills the guy. On the drive home she yells “It’s him !” and points at a different man and then another and then another. Day Yesterday someone picked up and walked off with my Lonely Planet guide book. As I was sitting by the pool today a man carrying a Myanmar Lonely Planet walked by. It’s Him ! I sneak past him to see if he has left my bookmark in place, then I leap on him and wrestle it out of his thieving hands. He’s too smart for me he’s already ditched the telltale bookmark. I ask him if he picked that up in Myanmar and he explained he got it for his birthday, and his wife said “It cost like $35 and now I see them around here for $10, being sold outside the temples.” Hmm. Maybe this isn’t the miscreant I thought. 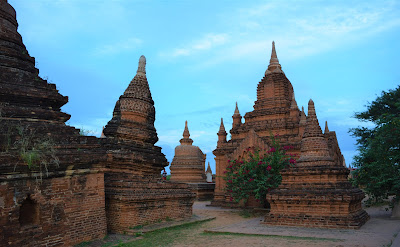 Loafed around much of the afternoon and then went out for a last sunset cart ride. Nice and simple and easy. The clouds killed the light for sunset pictures. I may have to return after Mrauk U if I want something good at sunset’s golden hour. We had a few laughs and the horse had a nice slow easy afternoon too.

Back at home we had dinner, I again ate alone and the family watched me eat. You know after a couple nights the food should have slowly merged into the sameness but every time it was new and exciting and fresh. I don’t know how they do it with an open fire and inexpensive ingredients.

They both walked me back to the horse cart. She put my arm around her shoulder and we walked down the lane. I offered a tentative sideways hug but it went unanswered. Probably isn’t the thing here. Back at the hotel I packed and listened to my book before lights out. 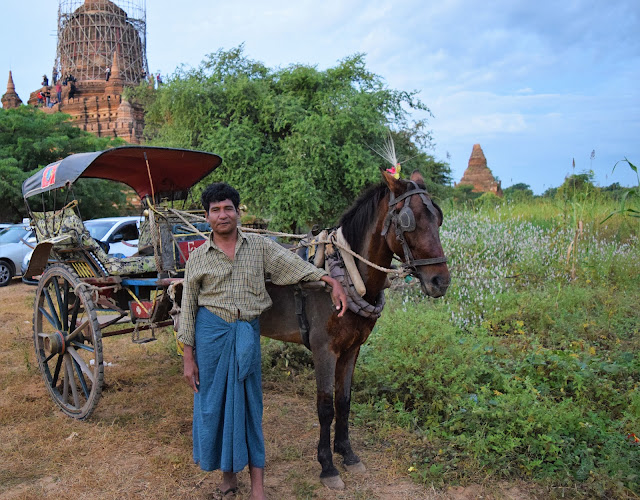