Lunch with the Mossad and assorted others

After a power nap yesterday I killed time in the room until around 6pm. I tried television but unless you are an all action all the time kind of watcher, or all news or business, you are kind of out of luck, TV wise. I can get NetFlix on my phone, but not on the computer. I think it sees the Thailand IP address and thinks I must be pirating it. Maybe I should have bought that VPN. Funny It likes my phone though. 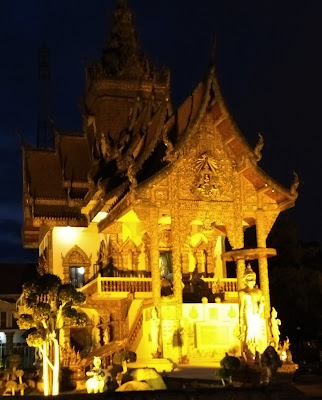 I left the hotel around the appointed time, hit the main street and turned right instead of left. Left takes me to the old city, right takes me only to the night market, but I’m sure it takes you places further than that. I walked and was beginning to wonder if it was all a myth, this night market thing and at the “Just one more block and then I’m heading back” point I found it. It wasn’t so much a market as I had envisioned, but a series of stalls on the street side of the sidewalk, peddling everything you need to fill out your already over packed suitcase on the way home. Textiles, lamps, dinnerware, clothing, stuff to put with your other trip’s stuff to keep it company. None of it for local consumption, purely for personal export.

I did find a fun area though. In an alley off to the side, opening behind the buildings was a food city. Maybe 30 vendors, each with a different item for sale, there was the beer guy, next to the bar guy, next to the Northern Thailand woman, across from the Phad Thai place, the burrito joint is just over there, want ribs ? Go to that corner. Want something exotic? $3 for a fried scorpion. I ate well for less than $10, and that included a vodka tonic, but no scorpion. They were just too small for the price. Ya, that’s it ! They cost too much for their size. Of course if they were the larger ones I’d have gotten a couple.

I got to bed at a decent time and set the alarm for 6. I’m not sure why I set the alarm, my internal clock s set to check the time for 5 am, o I got to doze until six.

The cooking school’s mini bus picked me up and another woman and young daughter were already on the bus. We drove around looking for the rest of the team and eventually ended up at the market where all the ingredients we would be using today were shown to us and explained the differences there are between some of the similar ingredient. I didn’t know the Turmeric was something like a ginger. I’d only seen it as a powder. Lots of rotted fish stuff that came in sauces, that sounded yucky but eventually tasted down right good.

Then back to the bus and a quick jaunt to the school itself. A lower floor on a townhouse apartment. 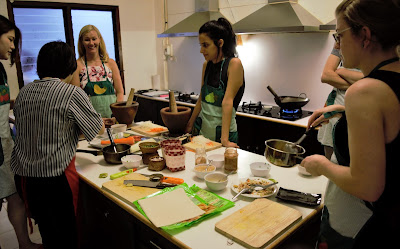 Set up with a table for eight and gas burners and woks for eight. The brochure said the class topped out at six, but we had seven. The lady I met on the bus, from Singapore, via Perth, via Manhattan. Nice lady, one of those people who know how to bring groups together. The woman from Korea who’s English was better than my Korean. A young couple from Portland, who really reminded me a lot of Jacob an Emilee. Both couples on the cusp of 30. Intelligent, quick, funny with responsible jobs. Then there was Boris and Natasha, the Mossad couple from Israel. He spoke pretty good English, she not so much. She was a bit of a princess and he was the Sphinx. I couldn’t even find out what city they were from. Ya, Mossad for sure. 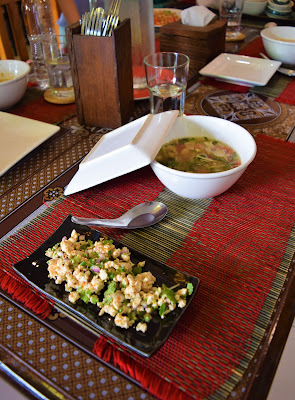 In the class we chose six dished and one curry to learn. Portland Tom, must have looked up the recipes before the class and chosen the most difficult, time consuming ones. He had one rice dish that he had to constantly stir for I think a total of 20 minutes, It came out wonderful, but that is a long time to shepherd one dish. Most of the dishes followed the same basic pattern, wok the protein until cooked (except the shrimp. Overcooked shrimp = tough shrimp) the add the vegetables cook til heated through with the hard veggies (carrots, etc) start to soften. Pour in some fish sauce, and oyster sauce, some yucky smelling stuff, a little sugar and then add the leafy herbs. All easy to make when the ingredients are there, the work goes into getting the ingredients at Safeway. But I’ll certainly give it a try once I get home. The food was all good, nothing I didn’t like, though by the end I was really running out of room for another dish.

I’ll have to ask my Indian friend how she makes her curries, because both here and in Cambodia we had to crush and pulverize the vegetables into a paste. I wonder if a blender would do the same or if the crushing breaks down the cell walls better. Pim the instructor must have been in the Army as a drill instructor, she was pretty adamant that when it came time to pound something, you better be pounding. No getting away with just doing the motions, you better be sweating.

Now I’m full and it’s 5pm. Though a drink and a smoothie sound like a good way to finish the day. Maybe a stroll back down to the food court from yesterday is in order.