Sorry for not writing in a couple days time and tide waits for no one, and me least of all.

When Last I wrote it was the end of the day in Mandalay. In the next morning at the ungodly hour of 530 I met the taxi to go to the ferry from Mandalay to Bagan. Between 9 and 12 hours depending on that height of the water and how many times the captain ran us aground on the sand bars. He must have done pretty well because we made it in 8. I think we only ran aground once, based on the lack of motion and all the yelling coming from the front of the boat. Pretty good by my standards.

I as actually the first on the boat, except for the crew. I picked out the best deck chair. Front row rail side. My hat and Lonely Planet book got the seat next to me. Yes I am THAT person. But we all know that I am special, an it seems my hat is very special.

There really isn’t too much to say about the trip. Sit your ass down and wait until it is time to get off. The deck chairs were among the most uncomfortable chairs ever Not long enough to lay on with out your feet and half of your calves hanging off the end. Then if you scooted up enough to rest your feet on the deck then there was no back support. When you lay back your your feet akimbo you had to thrash about like a turtle on it’s back to get up and slip forward enough to plant your feet. My hat and book seemed to fit just fine. 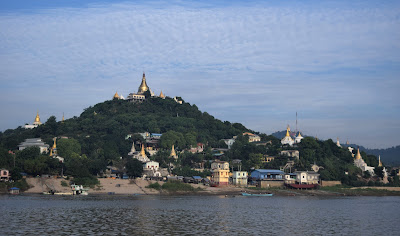 A boxed breakfast was serve and a cooked lunch of rice and stir fry for lunch. I need to write the previous day’s happenings so went into the main cabin where there were tables to write. Upon my return a F’ing French cow with Klingon wrinkles between er eyes has without the honor deserved tossed hat and book onto my seat. Then she laid the Evil Eye on me. I immediately got some salt to sprinkle around me and hat the ward of the eye. Then she invited a French cow and her neutered steer of a husband to pull chairs in front of us and pontificate on the price of beef or some crap like that. All they while they gave me Stink Eye. I had to get up for more salt and second cow couldn’t even slide her feet to the side to let me past her size 12’s.

We docked in Bagan around 3 and ran the taxi, horse cart gauntlet into town. Of course there was the taxi pest. Taxi pets don’t have a car. They latch onto you and then direct you to their pals and I assumed get a little nibble later, because the cost of the taxi was three times what would be normal here in Burma. Even though he promised me he had and drove his taxi, I somehow ended up in a friend of his’ taxi. Funny how that worked out. And I only had to say “You are beginning to fucking piss me off!” twice for this to happen.

The hotel (Number 3 in T rip Advisor and starred in Lonely Planet) is not one of those quaint ones. It is a room renting machine. Come to Bagan for 2 days with your mates, sit by he pool, E Bike to the temples, drink a bit and never leave the pseudo Myanmar your entire time.

My room was a reasonable size, with not working hairdryer, not enough plugs for a phone and computer at the same time You couldn’t sit on the toilet and open or close the door. Toilet that ran continuously unless you jiggled it’s handle. I ordered a bite and went to sign it to my room and was told cash only, even though they had insisted on a $50 cash (not credit card) deposit. Worst of all, twin beds. One night and ta-ta, adios. 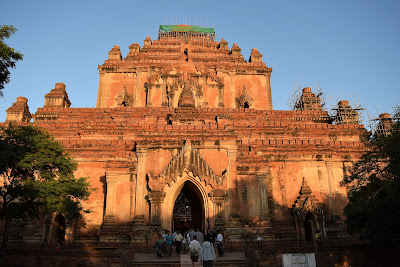 I wanted to find the horse cart driver from last time, knew his name and his horse cart number and where he generally hung out trying to get a fare. On my way I found myself talking to a different driver and he knew Bobo and where he lived. He side he’d take me there. On the way Mrs. Bobo passed us and we followed her home. I waited in silence for Bobo to come home as they chatted among themselves. Pretty soon he came home and looked right through me, he didn’t recognize me. I mentioned 2014, still nothing, then I mentioned my hotel and I think he put it together. A pick up time for the next day and it was back to the hotel.

In he morning I packed bags to leave and asked the desk clerk to to keep them for me and I’d be back later to pick them up. The day manager came over and I told him see you later. He asked what was wrong, I told him the bathroom was too small. He said well take a look at our balcony units for $10 more. The balcony turned out to be the exterior walkway with a chair or two. The room was the same size, with a larger bathroom, which made the living area smaller and still with the twin beds. Thank you, no. Take a look at our next step up for $10 more than that. I told him I wasn’t going to pay that. He suddenly lowered the price by five bucks. Okay I’ll look.

Yesterday is kind of a blur as far as temple crawling. It was hot and I was hotter. WE started out too late for goo light and the heat had started to rise before we left the hotel. Then the pick up in the afternoon was too early, and it was still hot, and we ha to kill time before sundown. The sundown location as not the best seat in the house. Maybe Photoshop can make it look right.

Bobo had invited me to dinner at his home and I had accepted. I’d brought along a big bag of Hershey Mini bars in case this happened. We arrived and there was one place setting and a wonderful array of food. Rice and seven or eight side dishes. Uhh……… This was not what I signed up for. I was expecting dinner with the family, not my private restaurant. Well better to just go with it, instead of embarrassing myself and offending my host and hostess. I sat down to a large helping of rice and then took a spoonful of each dish. Enough to be polite and get down in case it was awful, but not so little to look picky. There was chicken in an oil sauce, some fresh water prawns in a vegetable mixture. An unknown other meat and several vegetarian dishes.

Okay, time to put up or shut up. The first bite, I couldn’t help myself. I let out a moan with pleasure. It was wonderful. I can’t remember the last time I had that reaction to food. I was totally shocked. God it was good. The rest of the meal was the same. Great flavor, made with love and care. One of the dishes must have had peanut or cashew in it based on the crunch. Turns out it was pounded chicken bones. The shrimp were teeny and I assumed to be eaten in their shell based on their preparation. They kept wanting to put chicken chunks on my plate and I kept opting for the other dishes. I can get chicken at home. I have been fighting a light cold for a few days and my nose was drippy. I asked if they have any tissue. No, but In was welcome to use me napkin. I am not going to my snot on your napkins. What about these other napkins, they are smaller. No, you are not going to have to was my snot. I’ll be fine. Five minutes later a new package of travel tissues arrived.

I ate until I couldn’t fit any more in and still food was left. I figured out they ate in shifts, ladies and kids while the men were working and then the men when they got home for the evening. I guess I was dinner 1.5.

We killed a few minutes after I finished, but lack of language for in the way both ways, so I begged off. Thanked the hostess and her daughter for everything and instead of the horse cart, rode the motor bike back to my hotel.

Bad night at the hotel. Room was great. Runny nose raw from blowing. Headache. Gross. Maybe I just meet Bobo hand him a couple bucks and beg off sick. No, what you miss out on, you’ll never experience. Take an Advil and be an adult.

Well if Jesus was a Buddhist he would have a fit with the temples here. On the temple grounds and in some of the temples they are lined with trinket sellers. I needed a small clutch to hold walking around money and y hotel key card. I found what I needed and made the exchange and she took the bills and started slapping them in the rest of the goods. What did my money do to deserve this punishment? She said it was Lucky Money, first sale of the day. I guess it is showing the other goods what they need to bring throughout the day or else get smacked around tomorrow.

At a different temple, one of the women was good to be a sort of guide and I handed her enough to buy many of the things in her kiosk. I already had a full suitcase. She was offended. Maybe I should have bought something with that money from her. I’ll know next time.

Posted by Dorothy Macaw at 9:42 PM