No women allowed and lumpy smoothies

My last full day of this trip. Tomorrow is a plane ride to Bangkok, which kind of kills a day. One full day in Bangkok to prepare for Wednesday’s 730am flight to Tokyo and then home.

I like Chaing Mai. I don’t expect that I’ll return, but who knows. I woke up this morning slightly disoriented, for a moment I thought I was in Mexico. Chiang Mai reminds me of a trip I took to Cancun several years ago. True it is a foreign country, but the parts I’ve seen have been so heavily tourist-ed that if you could be in any vacation city in almost any big city. Every third store front is a local travel agent ho will gladly sell you a package tour to see monkeys, elephants or a zip-line. The animals change from place to place, the temples change, the zip-line and bungee jumps remain the same. I was afraid that Thailand would be too ‘discovered’ for me, and I really think I am right. If you haven’t traveled many places out side your home country, please come to Thailand. Yes, you’ll get culture shock, but it will only be 9 volts, not 220.

Cooking class took longer that I anticipated. I was away from the hotel from almost 9am until after 3pm. I got my money’s worth for the time I spent, plus some really good food. I came back to the hotel and washed up and cooled down before venturing out into the wilds (?) of Chaing Mai.

It was a trip with the biggest surprise of the entire trip, I met a French couple and they were very nice. 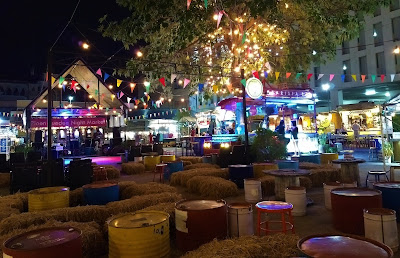 Now that was a surprise.

I went back to the food court, because I liked the atmosphere kind of hipster, kind of funky and kind of comfortable. In the center of it all is a covered stage area where a band could play, but the times I was there it was a D.J. Well worn groups of 4 theater seats were places around and brightly painted oil barrels were cut in half and used as chairs and tables. A comfortable area to sit and have a drink and listen to the music or just have a drink with friends. I opted for the music and since we all know that Quinine helps ward off Malaria, had a vodka – tonic. The bartender filled a plastic cup with ice, poured a shot and a half in and poured about the same amount of tonic water in. I drank it slowly and stood up, deciding then that maybe I should have something to eat and kill an hour, before walking back to my hotel. The sidewalks here are pretty uneven and the way I was feeling would make them even more uneven.

I ordered a pita bread thing, a cousin to a burrito. The meat came from one of those vertical spinny grills where the cook slices off the meat was the sideways BBQ spins. The man gave me mine and I thanked him is Turkish and he got a big smile and said you’re welcome in Turkish. It was very good, but a little messy, I can show you my shirt if you want to see it. I know it wasn’t the drink.

In the morning I decided to take Sunday mass at the Temple of Coffee down the street. I entered the Starbucks and who should I meet? The Mossad. Yes, I knew it, they are following me. Yesterday they were picked up after me, today they were lurking at the one place they knew I would go. See I told you they were Mossad. I wonder what I know, that I don’t know I know, that they are so interested in? They left, to spy on me from a distance and I sat and sipped a taste of home and listened to Christmas Carols.

The sun is out!! First time since I got here. When I was in Macedonia I was with some people from Florida and they could tell you how many days it had been since they saw the sun. Being from the Pacific Northwest, I wondered what the big deal was. Today I understand.

I might have a cigarette or two a day when on a tip. Today for some reason I was Jones’ing hard for one and walked past a woman and smelled smoke. She was setting up a blanket with her goods on it in front of a closed store, hoping to catch a few tourist fish during the day. I asked her if I could buy one from her and she insisted I take one. She said it all evens out, if she needs a cigarette and doesn’t have one, someone will give her one. So I asked her for a light. Since I had bummed the entire process now, I asked her is she would smoke it for me too. She got a good laugh from that, but left that up to me to do. I made sure to return her way and buy something from her. I picked up a nice key fob for my guesthouse. 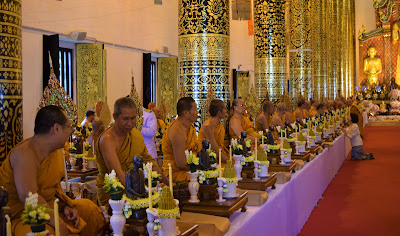 One of the places I missed on my walking tour day before yesterday was the Chaing Mai pillar location. A huge brick crumbling monster of a temple that is the city’s religious center. There was a 20 Bhat temple I saw on last walkabout, his was a 40 Bhat temple ($1.20). There is a huge cathedral sized temple on the grounds, but the actual pillar is housed in a very small one. No girls allowed, because they might defile the whole thing by being on their period. Never mind that they might be 5 or 75. The sign on the steps to enter it said No Shoes. Men Only. An Asian woman I was standing next to said to her friend “They should give us a discount !” 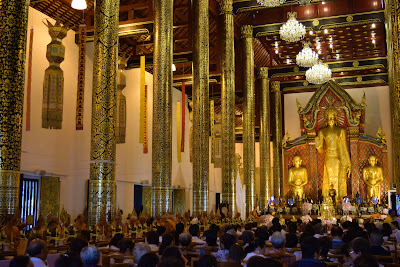 The large temple as filled with chairs today. I don’t know if it was a sermon or chanting, but a man was talking over the loudspeakers, and seemed to go on and on. Down one side of the temple were 50? 75 ? 100? Lotus position seated monks.

I listened and watched for a while and then left. Outside there were rows upon rows of young monks sitting in chairs facing the temple and listening. Well some were sleeping an a couple were sprawled on their chair – but – none were playing video games on their phone.

Behind the temple was a long row of pop up tents. You’ve seen them at fairs. Four legs that expand and hold up a plastic tarp. There was a 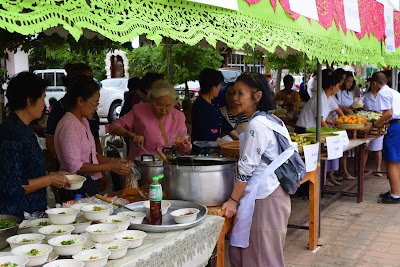 row of these that probably stretched the length of a football field. Cheek to jowl they were set. Everyone of them was giving away food. One had noodles, another curry, one had doughnuts, another ice cream. Rice over there, and even bottles of water. I’d seen something similar in Delhi, but that was the various temples, and predominantly saffron rice. These were from various businesses and it really covered a wide range of different foods. I should have avoided the Mossad and Christmas carols and come here.

I left after about an hour, and that guy was still talking. Some of the young monks had left too.

The walk back to the hotel was routine, except for picking up the key fob and stopping for a smoothie. I have no idea what was in it. Banana and yoghurt for sure. Some ice and funny little round blue things that I sucked up though the straw. They were like gelatin spheres. Chewy, not a lot of flavor. Heck they didn’t even taste blue. It was an interesting mixture chewy and cold and sweet in the same sip, but I wonder what they were. 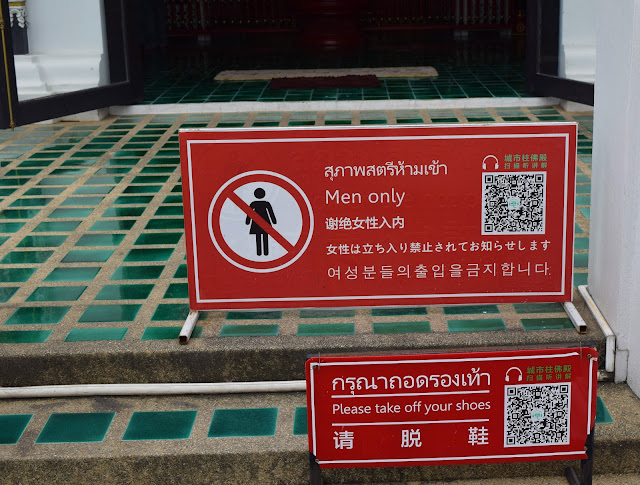 Posted by Dorothy Macaw at 2:35 AM