At the beach, at the Hilton. Really. Still expensive at half off, but at half off it’s pretty sweet.

Okay, so here is the situation.

At the conclusion of the first day’s ride with Bobo, I asked the price for the day and he gave me a very low price and smiled. I doubled it, and he said it was too much. I told him, I’m good.

Second day after dinner I go to hand him the packet of bills equal to yesterday, plus a hint more. He waves me off. Tells me No. I’m not having that, so I hand the packet to Marmar (Mrs. Bobo) who does take it, smart woman that she is.

Third evening, I just bypass Bobo and go straight to giving the cash to Marmar.

This morning Bobo tells me when he got home Marmar asked for the horse money. Ha-ha. Then when we get to the airport, in all seriousness Bobo brings this up again. Obviously, not joking. Now he’s thinking I’m trying to stiff him. I explained day 2 and day 3 with the horse money going to Marmar.

I’m now thinking that the cash I handed her she thought was for her alone, not horse money. I could have easily done and had briefly thought about doing something like that, but I was afraid that she might take offense to it. I know I would, if I invited someone to dinner or to stay in the guesthouse and they offered to pay me. They are a guest, not a customer. I am the customer of the horse.

Now I’m feeling like a rat. I should have thought quicker and realized the situation and given him to amount yesterday’s fare would have been. So here I am feeling rat like and my nose isn’t even pink.

Well back to our normal bitching and moaning, and today is going to be a lot of both of those. Since I will be around my peers most of the day I expect I’ll find lots to complaining about.

After I left Bobo and feeling under a cloud instead of sadness I pulled my bag to the right counter among a dozen on them in the gymnasium sized airport. Did the passport and ticket dance and was given a sticker to place

on my tit. I chose left. This sticker hows where you are going and on what airline. A green sticker with a black border means Yangon on KBZ, Yellow and pink means something else. I was told to sit over there and followed her directions.


I was sitting at the end of a four seat row. Instead of walking to the next aisle this woman (she was probably French) steps over me to walk to the end of the row and sit on that aisle. Then Mr. Probably French does the same thing, instead of using the aisle and stepping over his bride.

The tourists this time are a great deal different than they were three and a half years ago. Then Myanmar had only been open to tourists a short time. Then it seemed to be mostly kids on a gap year and older people with time. People looking for a hint of adventure and knowing to value their experience. At one airport a guy came up to me like we were long lost family. We had been on the same flight (different rows) two or three places before, and he wanted to say Hi. Small world sort of thing.

This trip I seem people I saw and made eye contact with on the ferry the day before and can’t even get a grin. The kids seem to be using Myanmar as a different Thailand, not so many bars. When it comes to bars, the number on their phones are the ones that count. Don’t think that there are real people who live here. Rent and E Bike and let the carts and taxis find their living off of some other sucker. Then there are the tour groups. Where there were 5 at a temple there are now 20. All 40 on each bus trying to get that selfie in the 10 minutes this stop allows, so don’t get in my way !

Pretty soon my sticker indicated I move to a different room for departure. This is one of those bus airports, where you get on a bus to get to the plane not a ramp. Now let me tell you the secret to plane buses. Wait until the bus is almost full then get on. That way you are first off and first to the plane. There were people pushing and running their suitcases over my feet to get on the bus first. Really! When we got to the plane one of the guys was actually pulling his girlfriend through the people like Uncle Tom pulling little Liza across the ice flow. She hanging on looking embarrassed. The plane was two rows of two, so he wasn’t going to get stuck in a middle seat, and if he did it was a whopping 45 minutes. 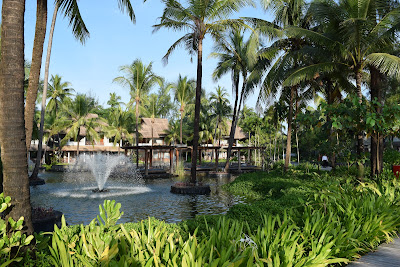 The plane got us to where we were going. A document review and we were back in the real world. I saw my hotel sign being held and made a bee line to him. He carried my bag to the van and we were off to the Hilton. A real Hilton. The room was on special on Hotels.com from out-fucking-rageous to just plain exorbitant. I walked into the lobby and knew I made a mistake. It was nowhere near the location I wanted. Oh, it is plush, the plushest I have been in in years. The room is the size of a small town and it even has a huge jetted tub. There is no sandy beach, only rocks and so the light stroll to a small stand to sit on the beach and sip coconut drinks at sunset is not there. It is a great place, just not my place. 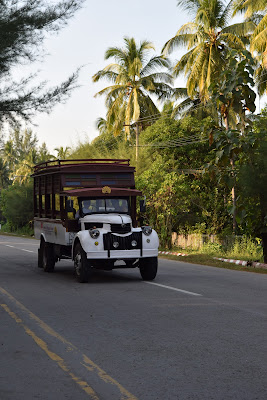 I told the clerk that I would be staying one night and moving to a different hotel, and told her, It’s me, not you.

I called the hotel I wanted to stay at and was told they were totally sold out. Okay. I checked Hotels.com and made a reservation at that hotel for tomorrow. I don’t understand the workings of hotel management. I’ll be honest it’s going to be a step down from the Hilton.

I didn’t do very much today. Went for a short walk near the hotel, had dinner wrote this, got a few nice sunset photos. Nothing of any consequence. So instead of rambling I think I’ll close.

p.s. I'm going too be in an internet iffy location for a bit 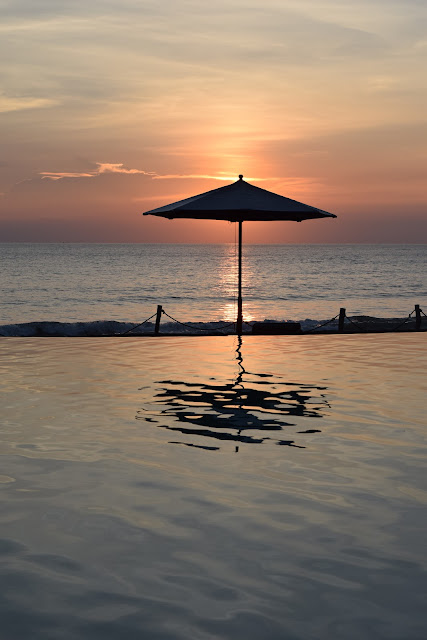 Posted by Dorothy Macaw at 4:31 AM