Well shit! I just hit the wrong key and an hour’s worth of typing just went into the ether.

The past two days have been a welcome respite from temple crawling and tomb raiding. Now the last hour or so and back on he road and back to the heat and dust of the countryside.

Off to the main reason I came back to Myanmar, to see Mrauk U. Locals would ask me where I wanted to go and I would say “Mur-ack-Oo” they would look at me blankly. Finally a woman at the desk her said “Oh ! Meow Oo !” how they get Meow out of Mrauk is beyond me. In wanted to catch an early flight from here to the closest large city this morning, but that flight was canceled, and the next one isn’t until mid afternoon. That kind of kills my plan of arriving at Mrauk U in daylight since it is a 4 hour boat or taxi ride from Sittwe, and absolutely kills the boat ride idea. Oh, well it will work out --- or not. 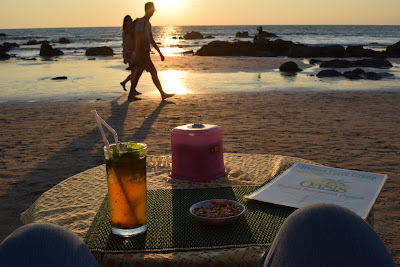 Yesterday was mostly smoothies and Coke Zero at the beach side bar at the hotel. It was just too hot and muggy for much exploring. The weather report said 88 and feel like 100. I believe it.

Around 430 I took a saunter down the beach to one of my favorite all time restaurants. The Green Umbrella. A little place that I walked by three times before I realized what it was. Maybe four low tables and eight reclining chairs. Only marked with a bamboo stake in the beach topped with a green umbrella. Great cheap drinks served in a coconut and three guys and a grill to cook some fish if you wanted it.

I really have noticed an up tick in tourism in the last 3 ½ years. Well now 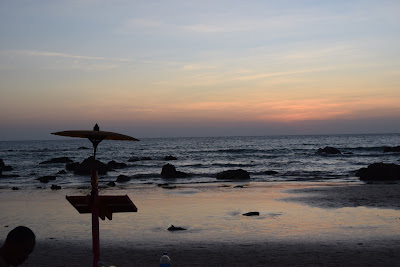 The Green Umbrella has 6 tables and recliners, a dozen dining tables, a kitchen, electric lights, a roof and actual glassware. Also four other other small semi permanent restaurants have sprung up next to it. The Green Umbrella has grown up. I ordered a Mojito and sipped and munched some peanuts and watch the sun set for the day. The three Asian men next to me went trough ¾ of a bottle of Johnny Walker, I don’t think they were there for the sunset. 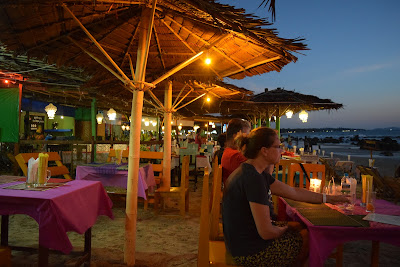 After the sun cleared the horizon I mover to a dining table and ordered the mixed grilled fish, a tomato and onion salad and the rice that was included. Oh ! And another Mojito. I don’t know if it is the location or the spices or what, but that tomato salad was among the best I’ve ever had. The fish was good too, octopus and prawns and fish and some really chewy stuff all with a nice grilled flavor. There was a crab there too but it was so tiny I couldn’t figure how to eat it. All in all a really nice meal for $9 drinks included.

By now it was fully dark and I ad to walk back to the hotel. The beach or the road. The road and I might get hit my a bus or a truck. The beach, well … there was a stretch of about 200 yards that was totally undeveloped and so very, very dark. I’ll was as close to the water as possible and as far from the trees as possible and it will make it more difficult for someone to walk up on me. The smart thing to do would have been to trail behind a couple as they walked the beach, but smart does not always come to mind until later.

I get to the dark area and I an verry, verry sneaky and alert and still out of nowhere a woman appears about 20 feet from me. I grip my bag and camera strap, my knuckles so white I am sure they glowed in the dark and step a little closer into the water. She follows, not closer, just there. Eventually I look back and she’s going back the way she came. I made it back to the hotel unscathed and unmolested, washed the sand from my feet and locked the door behind me.

This morning I was asking the hotel’s manager about the woman of the darkness. She thought about it a bit, I could see she was working through a few things. Finally she said “There is a Lady-boy down there and she has followed me a few times too”. So the dark area is the Lady-boy stroll of Ngapoli Beach.

This morning at 530 I hopped on a bike and peddled down a couple kilometers to the village to watch the sun rise and the fishermen unlade their nightly catch. Nice ride in the dark, no cars or trucks I pretty much had the road to myself. I followed the scent of rotting fish to the bay and waited for the sun to come over the hill. No one was unloading fish today. Not sure f I am late or last night was no fishing. The sun came up, I sent a few instant message of the sunrise back t the USA and I pedaled back to the hotel and beyond. I totally missed the hotel and was well on my way to China before I realized I was off track, I go turned around and back in time for breakfast.

That should bring us up to date for now. 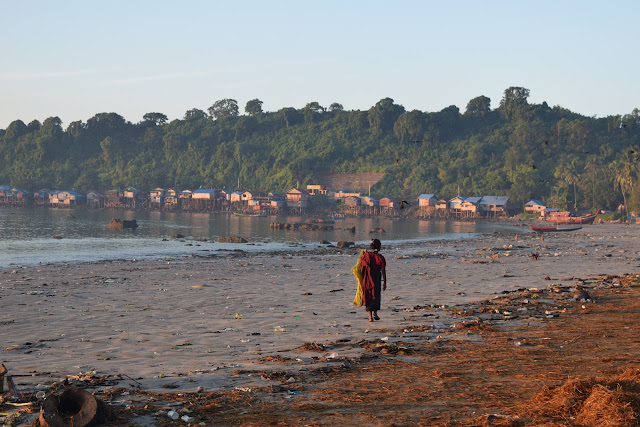 Posted by Dorothy Macaw at 5:17 AM