Yangon to Bangkok to Chiang Mai - All pictures from Chiang Mai

Well there went Thanksgiving. Some of you are still digesting the annual turkey feast as I write this. My Thanksgiving yesterday consisted of a pretty good club sandwich, soggy fried and a vodka tonic, on AstroTurf amid a flock of mosquitoes.

Last time I wrote it was in the middle of a down pour in Yangon (Rangoon), Myanmar (Burma). The hotel in Yangon was pretty plush, kind of expected to see some British guy in khakis, handlebar mustache and an elephant gun. It is one of those places that has been there since God was a child, but has been maintained and upgraded as the years passed. Keeping that original colonial standards and feel.

I slept forever, instead of waking at 330am or 4, I slept until 630 and then stayed in bed until seven. It was the first time in a while I didn’t have to be up to meet a ferry or see a sun rise or climb a temple. The morning routine was relaxing, like a vacation should be.

Breakfast was wonderful. There is always a good assortment of eggs and an egg station and breads 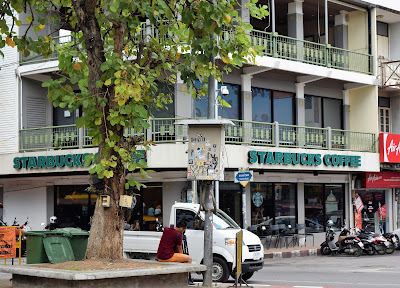 and bacon or ham, plus a bunch of Asian dishes. This one had all those and fancy cheeses, smoked salmon and – and --- sushi. Instead of the run of the mill coffee, espresso. I should have stayed another night.

During breakfast, this man walked up and said, “I’d like to introduce myself..” I interrupted him and said “We have already met. You managed a hotel I stayed at in 2014.”. He didn’t remember me, but did do a fair job of faking it.

My plane was scheduled to leave at 1pm with a two hour layover in Bangkok before going on to Chiang Mai. My morning’s email said the plane was going to be delayed by an hour. Grrrr… an hour to stand in Immigration line and then get to my plane in time to not sleep in the airport? Looks like something new to bitch about next time I write.

I killed time by writing hotel reviews for TripAdvisor. Some good, some neutral and one scathing. 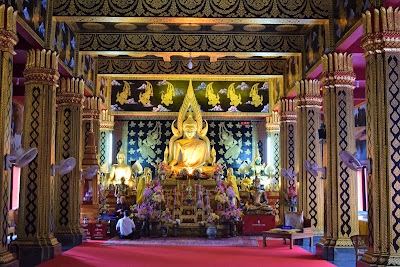 he plane arrived as expected, an hour late. Air Asia s a great turn and burn, no frills airline. Extra leg room, that’ll cost ya. Same for a Coke or bag of peanuts. The flight attendants not only are charged with our safety, but being a vending machine, and cleaning up the trash from the bathroom.

I showed my ticket to one of the FA’s and she had me move from the middle of the plane to the front of the plane along with five or six others. The plane landed and we were personally escorted off the plane to a waiting van and driven away before the other passengers even saw their bus. Then a long walk to our own Immigration officer. Then to the gate. I imagine the time from door opening to gate side was less than 30 minutes. The plane to Chiang Mai was on schedule and so no bitching about planes tomorrow.
The hotel I choose was not the best choice. Other guests on TripAdvisor complained about the noise and they were right. The bed was okay, but the bathroom was really small. If you don’t include the shower area I have actually been in larger commercial aircraft bathrooms. I farted and the door slammed shut ! (not really but it was too good of a line not to use)

I spent much of the evening searching the internet for a different hotel. Which is where I am now and it is lovely. The except is they put a rose in my room and I am now sneezing and it would probably be rude to flush it.

I went out for a tour of the local neighborhood and found the old city with ease. The old city are now just the city walls and millions of tourists and all the things tourists need. Thankfully the Starbucks and McDonald’s are just outside the city gate.

There were a myriad of shops to look at and trinkets and textiles to buy. A few temples and you didn’t have to climb a series of uneven steps to enter them. The walk was city street flat, and chaotic, but controlled chaos when crossing the street. Even I succumbed to the temptation of picking up a trinket or two.

In one of the temples there were three very realistic looking renditions of I assume past monks. Three of them in a sitting n a row, with their hands in their laps next to the Buddha. It was kind of creepy in a Madame Tussauds'  sort of way. I got the picture of the altar I wanted and bowed slightly to the wax figures. The one on the left gave me a slight smile. No wonder they were so realistic!


Back at the hotel, waiting for the heat of the day to lessen a bit then off to the night market a short walk after 6. Cooking class tomorrow. I found this in the hotel packet. 800 Bhat is about $25.

Posted by Dorothy Macaw at 2:54 AM