Ignore this post. It is just mid trip bitching

When last we left our intrepid traveler she was tired of looking at Incan rocks in and around Cuzco.

The next day I got up at a reasonable time, had a slow breakfast and then caught a taxi to IncaRail’s offices for a ride to Machu Picchu. I left the majority of my luggage at the hotel, since it was only for 2 nights and the guidebook said they had a bag size limit. At the office it was a mad house, backpacker types just hanging around, student types in clusters, tables of 4 early retirees in clothing from expensive outdoor stores and nicely dressed employees. Everyone seemed to know what to do, but I guess I had missed that day at class. Finally I just found a line for a bus help out my ticket and got on, hoping I was going where I wanted.

The bus started out of town and started climbing, and climbing and still going towards the Heavens. Uhh.. I thought Machu Picchu was supposed to be lower than Cuzco., and the only way I want to to higher is in an airplane. Eventually we crested and started down hill. Zig Zagging down and down and stopped at another building the had IncaRail on it. More of the same as the last building with IncaRail on it. A woman ranted in some obscure language that is used in this country, known only to it’s residents and American linguists. I went to the bathroom. When I came out everyone on my bus was gone. Alien abduction? I waved my paper under some uniformed guy and he responded in this obscure something that sounded like “Eestation” .. I wanted the rail station, but he pointed so I went. 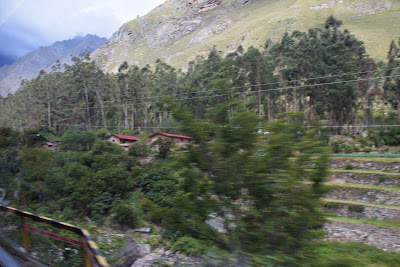 Down the hill a few blocks I found rail tracks, this was looking good. Paper wave and more pointing and so I went walking and realized it as the wrong train. I had the pretty good train, not the normal train, so I crossed the tracks got a whistle blown at me, and gave him my best dumb look (rest assured I am a mistress at it) and he pointed at a train car and the shoo’ed me back across the tracks. Kind of, here’s what you are getting or Christmas, but not yet.

Finally we boarded the train, found our assigned seats, though several missed the Alphabet day, and some were sick on the day we did our numbers, but after some confusion, butts were in seats and off we went. An airplane lunch was served as the tracks clicked under us and the scenery flew past. Then the train slowed and we stopped. Everyone on the train got up and left, so I did too.

Then there was the matter of finding my hotel. Here instead of exiting through the gift shop, you enter through the gift market. I mean gift market. Not a single bit of food to be seen, but yards and yards of t-shirts, stuffed thingies, carrying units, all in bright colors and on Special today only, just for you. BUT, only if you speak an obscure language. I knew I had to go up, I didn’t realize how much up, I had to go. First stop, the lady said go up until you find the orange …. uh … ya orange bridge and cross it. That only took two rest stops. The pizza guy said go to the corner and turn left. I go to the corner and looked left – it went down. I wasn’t about to go down without absolute certainty. The next Pizza guy says go up to the main square, 5 minutes. Either he doesn’t know how to tell time or he doesn’t know me. Three more rest stops and I found a hotel that looked like the one on Trip Advisor. I had made it. Honestly it was the hotel at the top of the city. There are no other hotels above it.

The hotel clerk takes my passport and asks how I am going to pay. I say cash, but the Hotels.com made the reservation and has my Amex and will charge it. I just have to get USD exchanged into Peruvian Soles. Oh, no, that isn’t happening. He needs the moola right now. I give him my Amex and will deal with it when I get home I guess. The room is nice, billed as a queen on the 5th floor (elevator), but the bed seems bigger. Great view and what you’d expect for the price. 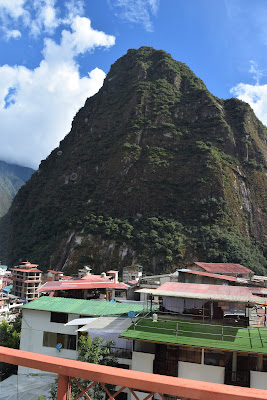 In conversion with the bellboy he asked me if I had me bus ticket yet. No, don’t you just wait behind three people and give then a dollar and get on the bus? Nooo, the bus ticket office is down by the train station and the line is long. BACK DOWN ?!?? Nooooooo…….. He said I’ll get it for you if you want. If I want ?!?! Yes please. Okay, they want $24. Dollars, not Soles? No, dollars. He was gone maybe 20 minutes. Sorry I took so long, the line was long. It took me an honest 30 minutes to get here when I got off the train. I thanked him and gave him the equivalent of $10 +/-. No this is my job. Dude, you are killing me here, please take a five, please. He took it, thank God.

Then I asked the desk about a guide. They said they would try. They had the $90 guide and the $60 guide, but the $60 guide is booked. Of course. I booked Mr. Big Bucks.

I left the hotel for dinner and if the shop isn’t a gift shop it is a restaurant and there are a zillion of them. I found one close to the hotel, no down, and had some Avocado something and some soup while I read my novel. Then the lights went out. Not the entire city, just the 4 next to my eaterie. Guess I better accept my losses and go to bed.

Posted by Dorothy Macaw at 6:59 AM