I went out to dinner after the last post. There is a world famous chef, Nobu, who has a place in Las Vegas. It is one of those places that a reservation way in advance is a good suggestion, and if you have an American Express Black card, that is also a good suggestion. This prices are sky high, but his product is about the bet and most innovative Sushi that side of Japan. He has the freshest, best packed on ice in Tokyo and flown to him for that night’s dinner. Well he stated with a restaurant here in Lima, and I made sure to go there for a meal. I want to rave about it, but it was just good. The seafood was fresh (of course) but I didn’t find that the suggested dishes made my mouth dance. I tried to order some sushi that in any sushi place you can get, this place needed an interpreter and a description on how the item is prepared. Amma Ebi is raw shrimp, Ebi is cooked shrimp. My Amma came cooked. The woman sitting next to me at the bar said she came here twice a week and suggested a Scallop sushi. It was good, but more ceviche on rice than sushi. I suppose that I will just have to wait for my American Express Black card to come in the mail to find out just how good Nobu is.

The hotel’s A/C is either refrigerate or stifle.

In the morning I decided to revisit the central square and watch the changing of the guard at the Governor’s residence. When I was there my first days in Peru, I got there in time to see the marching band, march away. This time I allotted enough time to be there for the entire thing. I found the worst taxi in the city. The driver was good, but the poor car should have been shot and left at the side of the road. It coughed and sputtered to get going, and Lima has a lot of stop lights, none of them synchronized. Once it got rolling it seemed OK, but getting going never was a sure bet. We did make it though. 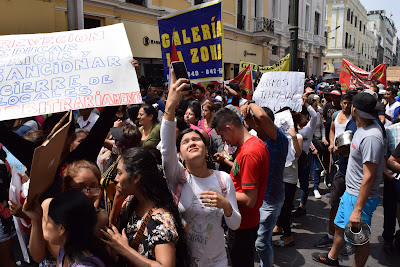 Do you ever read those State Department traveler’s advisories? Usually in the top sentence or two is “Avoid large crowds and protests”. I don’t know what it is, but the sound of horns blaring, pots banging and people chanting is like a Siren’s song to me. The ship has to go there, even though I know it is less than smart. So I find myself in the midst or a huge protest. At the public market place riot – or – a fire broke out and the city shut it down for 13 days – or – 3 weeks (I had 2 sources hence the differing reports). The protest was against the shutting down of people’s lively hoods. Whistles, horns, pots and pans, yelling and a crowd so packed you couldn’t fall down. If you fainted, the people pressing around you would keep you on your feet. Like an eel I slipped through the crowd towards the main square only to run into a phalanx of police in riot gear, backed up by crown control fencing, backed up by riot police on horse back, backed up by armored water cannon vehicle. Now it was getting interesting. 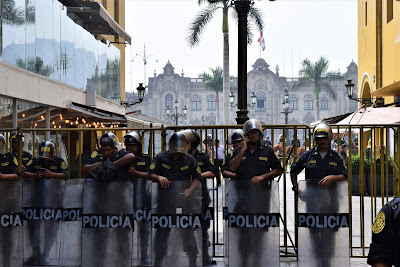 wanted to go was not where she wanted me to be. I remembered from ski lift lines, if you want to get on, go for the edges of the crowd. I wiggled and wobbled back through the protest and started looking at the next street down, still pretty strict. Around the corner I watched shop keepers and business men get past. I didn’t quite fit that demographic. The next street a tour guide showed his badge to a uniformed officer and I just slipped in to the rear of that group. Past the first ring of security.

Next I sat and watched as school children on a field trip and a few tourists pointed to the Cathedral and got past that ring. I waited stealthy like a Puma and at the moment the uniformed keeper outer wasn’t paying close attention, slid in like butter. Now there was a small waist high barrier between me and 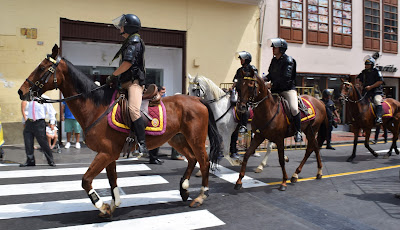 the gate to the governor’s house, but it was totally devoid of any living thing and totally exposed. A virtual (wo)man’s land. I’d never make it. The horsemen would be on me before I could waddle 10 feet. I had satisfy my curiosity from where I was. But I did take it as a minor accomplishment.

Where thousands of people stood the last time I was here, there was only 6 or 8 mounted police. It was so odd. If it was a movie, there would have been tumble weeds and dust blowing across the plaza.


Well that passed a couple hours, so catch a taxi back to the hotel and chill out in the room for a few hours and start planning dinner. The restaurant for good ceviche was closed, as was the other one, and the next. Then I find out, that the chefs of good ceviche restaurant only serve from 11 to 3. After that the fish isn’t fresh and hardly worth feeding to the cats. I ended up going back to a place that I had enjoyed before, but it was a disappointment. I know I’ve just about come to the end of a tip, when I start thinking like a local. 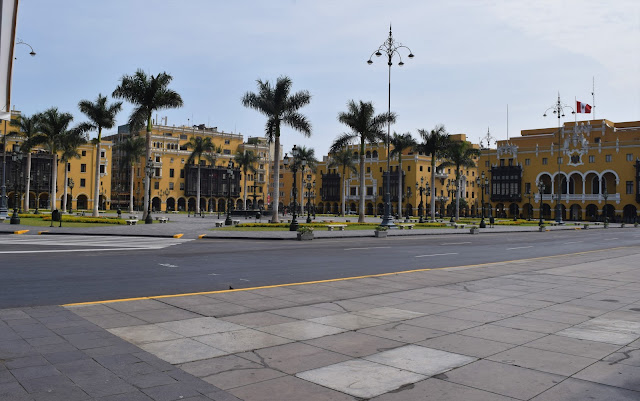 Posted by Dorothy Macaw at 8:32 AM