The day started out as any other day. Way, way too early. I couldn’t remember if the boat left a 5 or 530am, so got up at 4. Turns out it as five thirty, and at five fifteen Fiona was shining her laser like head light in my face. Mary Ann was also on this trip. They had a 2 hour layover at Refugio since both she and Fiona were leaving Puerto Maldonado later than the rest of us. I was looking forward to a leisurely 6 to 8 hours on a fiberglass canoe with an outboard on the back and no toilet facilities. That sounds like something directly Heaven sent. Not.

The ride was the ride. The engine noise in the rear, the wind in my face. The guides yacking among themselves. I am occasionally nodding off and occasionally awake. We’ve past this same river several times now Crap ! I could almost helm the boat. Just as I am starting to relax, someone up 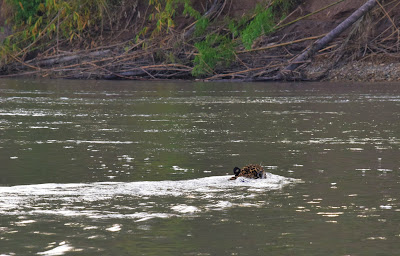 front is making a big commotion and pointing at a sand bar. Then I hear the word “Yag War”. Yag War ?!?!? Not Land Rover or Aston Martin, Jaguar !?!?!?!? Well so went my nice relaxing time. I sort of see it waayyy over there, and pop a iPhone shot. It isn’t worth getting out the Nikon. The guide says “we’ll wait here.” - I knew it - “and go back when he starts to cross the river.” - REALLY !! Time to get the lens cap off the telephoto. The cat got in the water and the driver pulled around and got almost too close got my telephoto. It was a real treat to just see this head in the water with a small wake behind it. When it got to the shore I guess it didn’t view us as harmful, because it loped along the river bank for several minutes before squeezing though the bamboo and back into the 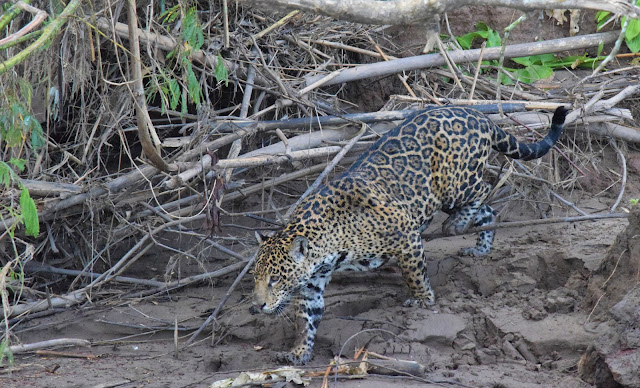 Everyone on the boat was jacked on Adrenalin. And it took a while before the doldrums returned. Fiona and Mary Ann got off and a new tribe got on. Half way there, only 3 and a half hours to go. We didn’t have any adventures from that point until the port, bus ride and airport and still no drama. My last view of Puerto Maldonado was Fiona waving good bye to me. Some way she and Mary Ann made it before I left. A two hour break would have been sweet. 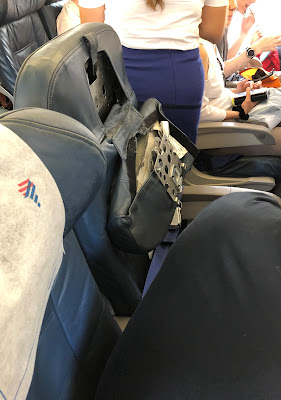 aisle seat. I settled into my window seat and sat back to wait and see what happened with the headrest passenger. Well wouldn’t you know, he showed up, before even looking at his seat, takes his carry on and pounds it into the bin before his row number. I felt sorry for any squishy someone had put in before him. Then he notices his seat (why the cabin crew didn’t short cut this earlier I not for me too know) and throws the proverbial shit fit. The flight seems to be fully booked and Mr. My bag is more important than our bag, might have to sit on a different plane. The crew found him a seat, darn. Then I see Mary Ann walking down the aisle. She must have gotten herself on an earlier flight. Good for her.

The plane takes off, reaches cruising altitude, starts to descend (just a little) and we land a Cuzco. When I get to the door I see stairs down. This can only mean one thing – stairs up. Mind you we are at 11 thousand feet, and I’m used to sea level, plus 5 feet 9 inches. My calf is still a bit angry so the stairs go slow, in the terminal is a ramp that goes up 20 feet. I refuse to show weakness and tell myself Cuzco is as good as anyplace to have a heart attack, so no stopping! I made it, barely. I did ‘need’ to stop at the top to adjust something in my bag though. As soon as we reached level ground we had to go back down to street level, where we started ! Waiting for baggage, Mary Ann came over to chat. She ad arrived just as they were going o close the cabin doors with 2 seats empty and she got one of them. Lucky. She asked if I wanted t share a taxi, I told her the hotel said they wold send one for 20 Peruvian, but she was welcome. Of course the hotel failed to send one. Some slick as willing to do it for 30, I told him 25, mumbled something bout 5 to park, I said 20. He turned away. A minute of so later he says how much you want to pay. I told him 20. He hollered over to the junkiest taxi with a light on top and off we went for 20. Mary Ann said she paid 50 to and from the airport last time. She said I guess it pays to haggle. I;m glad she was along, with her help the driver found my hotel. We bid adieu with a hug and off she went.

The hotel is nice enough. Close to most of the tourist spots and off the street. It is a little noisy, but the reviews noted that. 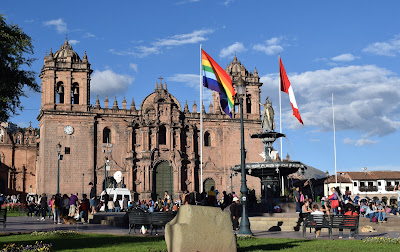 I dropped my bags and went for a walkabout, slowly, very slowly. Found the Cathedral and the worlds highest Irish pub. Had a glass of orange juice and a plate of nachos there (Irish nachos aren’t that good) and came back to the hotel. Gasping for air all the way.

Posted by Dorothy Macaw at 5:45 PM