I believe I might survive. I was questioning it that first night. So let’s return to days of yesteryear, well 24ish hours ago.

I hate stairs ! After wandering a little around town and dinner,, it was pretty much bedtime. I took the appropriate tablets and lay in the bed gasping for air. Nothing was turning blue but I could never seem to find enough air to satisfy me. I was afraid that if I went went to sleep I would breathe so shallow that I would not wake up. Obviously that didn’t happen. I woke and just couldn’t get out of bed. Got to the bathroom (remember no T.P. into the toilet – I frequently forget. I mean it’s automatic) then back to bed to catch up on air. If today wasn’t so special I’d have headed to lower climes. After about twice as long as it should have taken I was out the door and in search of breakfast.

I found a nice little coffee shop one flight up (drat!) overlooking the Cathedral. It seemed like a good place to get revved up and to sit for a bit. I’m looking at the sights and some dude is yakking on his cell phone and jet like decibels. I see a likely looking couple speaking English, so ask them if the know what time Pawhusky Jesus comes out. (In Puskatawny Pennsylvania every year on February 2nd a rodent is pulled from his den and is supposed to predict how many weeks of winter, Puxatwny Phil) Here on Holy Monday a huge black Jesus comes out of the cathedral and is walked around town. His is supposed to ward off earthquakes, just like he did in 1650. These two guys were as clueless as I was. So I went to Mr Yak-yak. I take back all the bad things I said about him. He was really sweet. He first of all it was not Jesus, it was The Man of Earthquakes. Hmm.. some guy nailed on a crucifix with a crown of thorns is not Jesus, OK if you say so. Regardless of semantics he was supposed t emerge from his smoky lair around 2pm, about the same time he did in 1650. Well that made my schedule clearer. I did some ore walk about, avoiding stairs whenever the were avoidable.

I went into the cathedral, where the Bishop (or possibly Cardinal) was giving today’s sermon and then Mass. No photos allowed, sorry. The place was full of a mixture of tourists, reporters, worshipers and locals. Smoke and smells wafted from the altar. On the steps to the altar sat 100 young boys all dressed in white, with wings and halos. The altar itself consisted of a black crucified Jesus (Hmm.. maybe his online persona is Mister Earthquake). He was wearing a gold inlaid skirt. According to the guide book, he is Lilly white under his skirt (I guess he doesn’t get outside all that much). The red flowers that are burned at his feet have blackened him over the centuries. Mass was nice with the call and response, and the organ and choir. My grandmother was Catholic and one time 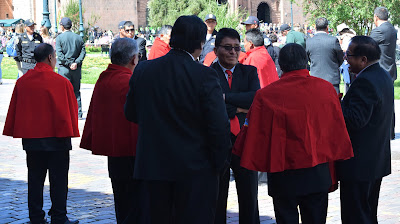 lit a candle for me, I thought I could do the same now. Well candles are now in the 20th century, in the form of electric light bulbs. I told her in missed her and popped in a few Soles and a lamp lit. Sure seemed anticlimactic.

I ran the gauntlet of picture sellers, jewelry vendors, restauranteurs, and of all things masseuses, back to the hotel. To relax before returning to the square around 1230pm to grab a seat to wait for the emergence.

I found a set of steps with the Cathedral doors in sight, so I snuggled up against a pillar to protect that side from interlopers and waited. I people watched, as people came and went sitting next to me. One pair was from Winnipeg and he wasn’t handling the altitude very well. I told them about the altitude sickness pill that makes you pee. I had Goggled the side effect on my phone the night before so showed her. She took a iPhone picture of my iPhone’s web page. They departed and a few new sets came and went. Directly in front of me were men in black suits and wearing red capes. I thought they might be like Shriners (or the Cuzco equivalent)I herd English to me right and asked him what the were. He said the were the Brothers of Mister Earthquake. They were the only ones who carried that statue. Each helped carry it for fifty steps, then another group took over. The represented various churches. I have no idea if what he told me, but since I wrote it, it is now the truth.

Mister Earthquake was a little tardy, maybe 20 minutes, but he did show up to drumbeat and smoke. Slowly down the street he came. At the corner similar to the Rose Parade he had to make a corner. Very slowly he was turned and began down the street I was siting on. A sick snail could have passed him, but he was tenacious and kept chugging on, fifty pairs of feet at a time. When he got closer I could seen why he was so slow. There was the bier, the flowers, the solid silver base and the actual statue. All held aloft by a bunch of men released from the old folks home just for the day. As the passed under windows people were tossing red flowers the color of blood on to the statue. The 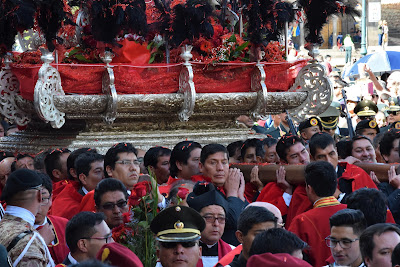 men carrying him with their perfectly coiffed hair, using oil or their wife’s hairspray were getting the petals stuck to the top of their heads. These guys were really working holding him up, you could see the strain on their faced and body posture. Immediately after passing me there was another corner. The men in the front stayed close to stationary and the men in the back were literally pushed by some sort of bully to move to their left to turn Senior Trembles and get him headed in the right direction – uphill. No thank you very much, I’d rather an earthquake than to lug him around.

I waited a bit and then went back towards the hotel, grabbed a bit to eat. I had given some thought of going back t see him go back into he hideaway, but during dinner the wind came up and a front came through and the weather went for cool to cold, besides I had pretty much had as much fun as I could stand for the day.

This hotel has a reputation as being noisy, so I took a Valium and slept through the after party.

Today I woke feeling normal. Got up, grabbed a cup’o Joe and went out after being advised to trade my fleece into for a rain coat. Back at the Cathedral, the main doors were open and I stepped through them only to be stopped and a minder. Who said, no tourists, only worshipers. I thanked him, tuned to leave and one of the other minders overruled him and told me to enter. I have no idea what occurred there, but I was happy for it.

Inside was a full Mass. With male and female choir. All the smells and bells you could ask for. Not a tourist in sight. Rows and rows of school girls and boys. A head priest and a couple rows of half priests and a covey of Altar boys. I thought I saw the Eucharist being given t some of the men on the altar. A pronouncement of faith my the congregation and the Lord’s Prayer. This is supposition because it was not in English. I went over to where I had lit my grandmother’s light and there was Mister Earthquakes. So he doesn’t live behind the altar everyday. Sort of off to the side so he can keep an eye on things.

I bought a city tour, that turned into an expedition. I thought were were going to sty in the city, instead we went all over the countryside looking at Incan rocks. I’m sure they were important, each in their own way, but they all blended into each other after a bit. I decided to sit out the last one. I was ready to quit 1 set of rocks before that one. It was getting colder and darker and we were nearing 13,000 feet. Time to know your limits. Back in he city proper we were dropped off and told to go there and turn right. That turned out to be a half mile uphill march back to the main square. Though even with 2,000 feet difference I could feel the difference in the oxygen level.

Back at the hotel, a bowl of soup and a beer. Tomorrow the train to Machu Pichu. I need to pack an over night back pack and eave the bulk of my luggage behind to pickup on my return. 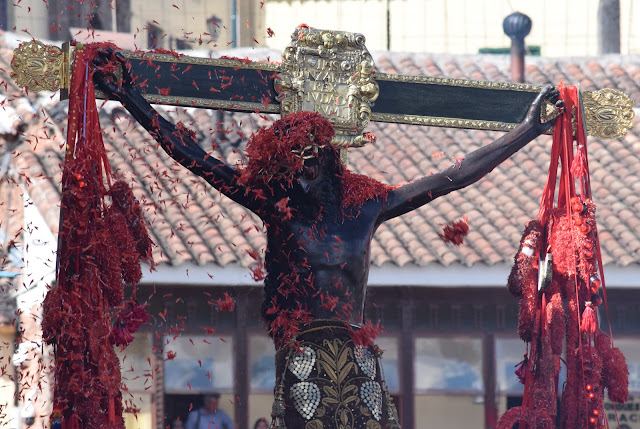 Posted by Dorothy Macaw at 6:35 PM