Oh, when the saints come marching

Got to sleep in today. That was a treat to not have to rush to some locale. Ate breakfast, and strolled down hill to the place where the train let me off. No one was there. That was odd, there is always people hanging around IncaRail. A man near by had the same look on his face and was intent on his portable internet thing. Then he brightened and started to walk away. I said “Excuse me”, to which he replied “Leave me alone I have to go!”. Ya …. well you and the horse you rode in on.

A couple guys came by and directed me in the right direction. A bit of a climb that I could have avoided if I had checked before leaving the hotel. In due time they called for boarding by car number. I got in the correct line and who should stand directly behind me? Ya, you guessed it. I turned to him and said “Thanks for the help.”. The line starts moving and I quickly find my seat, 50 and snuggle in. Directly across from me is a mature man, and who the F !! should sit next to him ?? Oh, Lord Karma you are soooo cruel. Mature Mike and I had a lovely chat all the way back. You know who didn’t say a word. I’ve got to try to remember everyone has their own baggage to carry and maybe his is heavier than mine. 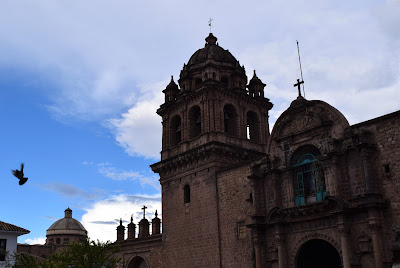 Back in Cuzco, I got to the hotel, dropped my bag and wen to see what there was to see on Good Friday. One of the churches had a bunch of military men out front and more inside the church. The Bishop was giving mass, so I thought I’d wander in. At the door there was his woman who stopped me and started pinning a picture of Mister Earthquake and a red twine with a cross on it. She had some type of uniform on so I let her have at. I mean, I wear green of Saint Patrick’s Day, I’ll wear her button for Good Friday. Then she extorted $3 for me, I thought a dollar and a half was enough, but no, she picked trough my change until she had the proper weight in silver.

Inside I didn’t stay too long. It was a lot of smells and stand up, sit down, kneel, sit down. I go the idea, and left. 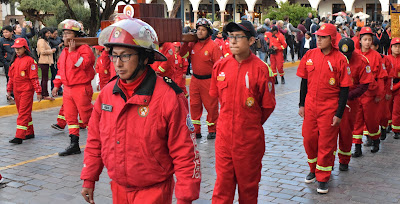 I wandered a little, exchanged some cash. Flounced down the street, sat in the park before the Cathedral watching the world go by. A woman walked up to me and asked if I spoke English. He then went on to tell me that a man was following me a little too closely, and when I but my hand on my camera he backed off and signaled to anther man. She told me to be careful with my camera. I thanked her profusely for that bit of information and was very aware of my surroundings the rest of the time. Thinking about it now, I wonder if he saw me at the currency exchange.

I found a place for dinner and read some in my current novel. Got done and as I crossed the street to enter my hotel, I could hear a brass band coming p the street. As the saying (song?) goes I love a parade. Groups of young men marching, the older men, then some very elderly women, all back straight and proud. A group of firemen and then some sort of glass coffin, and inside was Jesus. Now the penny dropped. They were escorting Christ to the tomb and the soldiers at the church before were his honor guard. Who should show up? No, not him. The lady who extorted the three bucks from me, she heads right for the woman next to me and tried to get her to donate, when she failed at that she looked at me and smiled and got back in the throng/honor guard of Christ. Then came a statue of Many and the brass band. Up the street they went. 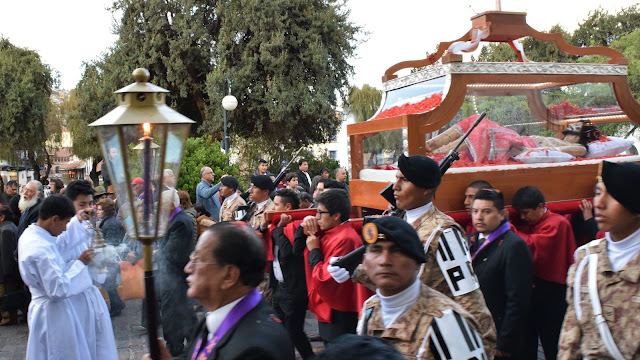 Posted by Dorothy Macaw at 3:49 PM