Parrots on the lick, at last

Dawn comes early ‘round these parts pardner. Around five thirty I decided to give up on bed. I had a solid 8 by then and it seemed like a good time to see how bad my leg was. Turned out not all that bad, certainly not 100% but 70% or so. Up from last eve’s 50%.

At breakfast on of my table mates said she had flowers, a balloon and a bottle of wine to celebrate her birthday 4/11. Only rub, she was born November 4th. One of those lost in translation times. But being a smart woman, too the card and the wine. It would have been bad form to refuse, you know.

It was the same drill as yesterday only at a reasonable time. Down the trail and steps to the boat and wobble across 1x12’s and aboard. A different boat. Instead of a bench seat the length of the vessel we had individual front facing padded seats. It was luxurious. We went back to the same clay lick as yesterday and had a chance to visit with my new tribe along the way. A pretty good tribe. Part of the tribe is a family with 4 or 5 children, maybe more. On the way the littlest one wanted to see a Jaguar from the boat. The guide pointed out a huge tree,I think it was a Kapok tree. Her father asked her what the guide said. She said the best reply of the trip. “Just another tree”. I didn’t have any complaints with yesterday’s tribe, but this current tribe is more interesting and has more depth. 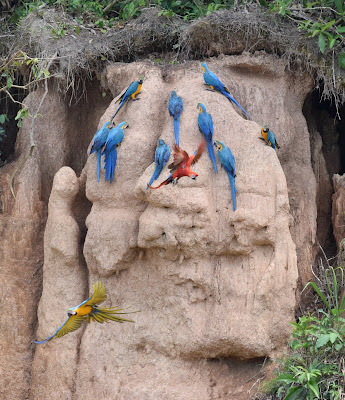 At the cove where the lick in located we grounded the boat and like Springbok leapt ashore. That might be a slight exaggeration. This group took the ‘Shut the fuck up ! And whisper” rule to heart. Not like yesterdays semi zoo. The Macaws were on the other side of the lick today and I was afraid it was going to be a repeat of yesterday’s solo clay Macaw. In pretty short order one flew down to the lick and then another and another. The all joined in, the Scarlets, Green Wings, and Blue and Golds, all jockeying a place at the table. There were a few territorial spats but for the most part. I was amazing, hat I was hoping for and expecting. This was the reason to come to Peru. We didn’t stay an awfully long time but we certainly stayed the right time. We stayed long enough to see the Macaws and for the teenagers to lose interest and start taking cutely posed selfies.

Back on the boat to unexplored scenery on the was to Tambopata. The river was low but running fast. We got grounded once and it took two men with poles to get us free. The guide said that in the dry season they will make some of the passengers get out and help push across the various bars. Arriving at the lodge I was thrilled to see that we only had a single flight of steps from the water sedge. Not like Refugio where I had to climb 50 steps to get to the 80 steps to get to walk uphill for 20 minutes. The area was flat !

We did the usual safari check-in a refreshing drink, and a lecture on the lodge and then the list of activities. Then we were escorted to our rooms. I had room 1. Everyone else in my tribe went one way and I went the other. I kind of figured it was D. Mengele pointing the healthy to thee right and old and lame to the left. Room 1 was a very short limp from the kitchen and dining area. The room is small and really uninviting. I have the feeling it is a room that is used by the staff since staff are on either side of me. But it is close to the main areas. One of my tribe told me that these room were over twice as far as they were in Rufegio. Except fr sleeping and toilet I’ve spent as little time as possible in there.

My tribe is cool. A couple potters, not Harry types. A fashion designer, male clothing

not female. An actress, who I don’t think I’ve seen, but think I will. Lunch of course was served. It had been at least 5 hours since we last ate a full breakfast. Gave us a chance to chat and bond. After lunch an outing was offered but I opted out of it, I was motorvating pretty well in the flat floor, but not so sure about on the trail. I typed a bit before my batteries died and looked at pictures of what I saw on my vacation, through the view finder of my camera.


At 6 a the sign up for tomorrow’s activities time. I (of course) did the local clay lick. I provisionally put my name down for a mi morning hike and an evening sunset boat ride. I think the term they used was ‘cruise’, it’s a boat ride with a drink at sundown, but you have to buy your own drink.

Since the clay lick call time was 445am I thought it would be a good bedtime of 9pm. Shower, a bag of ice, and some mosquito netting and ta-ta.
Posted by Dorothy Macaw at 5:00 PM