My phone app says that it is 79 degrees here. I thought I had it set for Fahrenheit, but must have made an error and set it to Celsius. It is roasting here. I’m sitting in a covered bar with a Coke Zero, not moving and I’m sweating. Maybe the app is broken.

After I finished with the entry last night. I went to the restaurant to splurge on dinner. I hadn’t been drinking as many fluids as I should have. Mostly because my plumbing was still not up to North American standards. One of the web sites said that soup is good, because of it’s general sodium content. So I ordered a bowl of fish soup and some sort of Fettuccine the waiter suggested. I forgot that soup on the menu comes in one size. Huge. Easily a meal with some bread, or split for a nice appetizer. The seafood soup was pretty good, lots of octopus and big chunks of fish, with finely diced potatoes (everything comes with spuds) and, and, and – wait for it – Lima beans! Finally. I only ate the protein and the broth since I knew there was a main coming. Then the Fettuccine came it looked great. It tasted great, a hearty meat, not sauce, what is thicker than a broth, pan sauce. It had a lot, an over abundance of pepper, that worked perfectly with the sauce. The protein? It was beef of some sort, but not a cut I recognized. Heavily muscled, nearly no fat, thin half moon slices. Click!! Beef Heart. I know, I’ve eaten crickets, and that a heart is just another muscle, but I found my limit for last night. If it had been stew meat or any other muscle I would have eaten it. The fettuccine as really good. I am ashamed to say, I wimped out.

I explained to the waiter that my eyes were bigger than my stomach, and that the food was outstanding, just too much. I didn’t tell him it was too much beef heart.

Yesterday I left a few Sole for the maid, and came home to twin towel swans and a flower. So today I took a bill folded it so just the face was showing. Then grabbed a piece of scratch paper and drew a body (worthy of any second grader) on it. Put the bill under the drawing. Now the war was on! I came back today from my flight to find a towel Elephant surrounded by blue flowers. I think she won. Wish I knew Origami, then I’d get her!

At 1040am I was told to be at the front desk to go to the flight over the Nazca lines. Over $200 but the hotel told me it was an hour and a half. That sounded a lot better than the usual 30 minute flight over the area. Once we got to the airport, a ten minute drive, it turned into an hour and ten minutes. Waiting to board, we were weighed. This was not good. Since I am fluffy and almost everyone on this flight was a skinny Asian, I knew where I was going to sit. Right under the wing’s balance point, right where that big strut was. So much for any photos without a hunk of airplane metal in it. Why couldn’t I be flying with a group of Sumo wrestlers?

We all went through security, bag check and metal detector. Seemed a little overkill for riding in a 12 seater to nowhere. But as we all know – Rules don’t have to make sense. The co-pilot was giving us an under wing safety briefing, and some idiot in the rear asked if he could move around the cabin. I don’t know if he was stupid or making a stupid joke. After yesterday’s experience on the boat, I fear he was serious. If he had gotten up, he’d have been the disc in The Price Is Right’s, Plinko game. 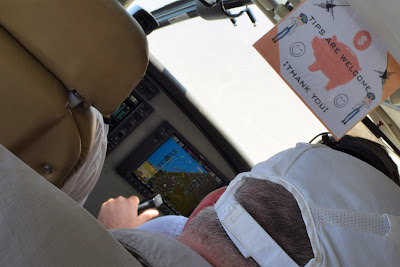 We got on the runway and rolled and rolled and rolled, I waited for the pilot to abort the takeoff, but he didn’t. As the end of the runway got closer and closer, the front wheel lifted and we were airborne. It was a nice flight to the lines. A couple bumps when we flew over hills or patched of green, but for as hot a day as it was, the flight was pretty smooth. We flew for twenty or twenty-five minutes and no lines yet. Hmm…. I opened my clock app and prepared the stopwatch function. As soon as he announced the lines I’d start it and stop it when he said we were on the way back. The right side of the plane got first looks then we looped around and the left side got to look. I don’t mean like flying in a jet flies over the land. Noooo…. He dropped a wing and I was almost looking straight down at the glyphs. Then he turned
and dropped the other wing. I didn’t hear Mr. Plinko bouncing around behind me, so I guess he stayed buckled in. There was a whale, spider, dog, humming bird AND parrot to be seen. I missed the Astronaut, and I thought it would be futile to ask to fly over it again. Left, right, left and right again. I didn’t hear anyone barfing behind me, but maybe they were subtle. Then it was over. I hit the stopwatch. Twenty minutes, fourteen seconds. Kind of a far cry from the hour and a half promised.

Back at the airport we were all given certificates of seeing some sort of critter. Condor or Hummingbird or something. All I know is it wasn’t for a parrot. The ride back to the hotel, was quick, and I was immediately set on y the driver/guide to fill out a satisfaction survey. He did a good job, but what? I’m supposed to tell the truth if he didn’t as he looks over my shoulder? When I pointed out the time discrepancy between the advertised time and the actual time, of course her English as poor a that point.

I think I got a couple good pictures of the glyphs, I’ll probably have to crop out some airplane from one or two of them. But I’m hoping for the best.

Posted by Dorothy Macaw at 2:24 PM