Last night was an early to bed night I was probably asleep by 9pm. Not a real sound sleep but it was more than being awake. The Howler monkeys were at it living up to their name with a vengeance. Why they had to do it a soon as the lights went out is beyond me. Then since there is no barrier between my room and the great outdoor, the critters came. Played tennis on top o my mosquito net for a lot of the night, with the spectators running on the roof and walls. I the middle of night nature called, not the Amazon nature, it as already calling, the normal nature call. The the decision, flashlight and wake up or no flashlight and step on somebody squishy or stingy. This took several minutes of thinking and eventually the flashlight over came the sound of crunching underfoot. The flashlight would have won out anyway. Is DARK! In this jungle when the lights are out. On Africa safaris, here is always starlight, if not moonlight. Here the stars can’t even penetrate the canopy, so it is like being in a mine.

I set the alarm and set a timer to go off at 4am. I had showered before bed so it was mostly jump out of bed and into clothing, Ala firemen, but no pole to slide down. We made the trek down the path to the steps leading o the water and the boat. I was sweating by 5am. We hopped on the boat in the dark 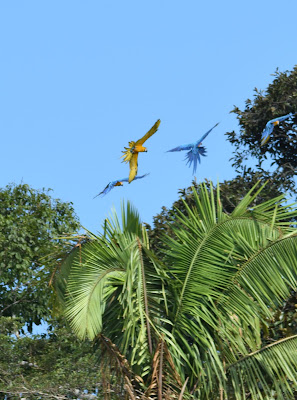 and were up river in a flash. I was surprisingly chilly after the sweat blew off, I was happy the guide advised bringing a light jacket. I was glad Matt suggested that I pack my Uni Bomber fleece it worked well, especially the hood. An hour of going up steam around sandbars, clearing some of them by no more than a foot, if I was reading the depth pole the navigator was using.

We pulled up to a sand bar and stepped ashore to watch the birds an Macaws for a while and have breakfast. Breakfast was pretty basic, not C Rations, but not gourmet. Some Macaws and some other birds came and flew around, but none ventured to the clay lick. We hung out a while then leaped like Salmon back into the boat to go around the corner to a different part of the same lick. Same thing happened as the previous lick. Lots and lots of Macaws and vultures and even a Toucan (they don’t eat Fruit Loops, they eat insects). Finally one brave sole Macaw made it down to the lick, but that as it. Lots of pictures were shot, I looked t them at lunch and I’m not really happy with what I shot, but with lick and no rain maybe I’ll get to make then right tomorrow or Saturday. Our guide was asking everyone for their call phones and took several good 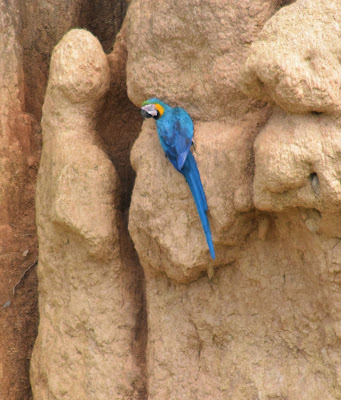 ones through the telescope. Back to the boat around 11am and back to sweating.

The boat ride back to the lodge was only transportation. The guide tried t show us a few critters along the way but no one seemed to have their heart into it. Back to the steps up the riverbank and the uphill jaunt and sweating yes again. I have been pouring water in but it is only coming out a perspiration. I’m not sure if I should worry or not. I am not. Lunch was a full meal and pretty tasty. Passed the time with some unknown people and listened to known people retell their adventures.

After lunch I found a few winks in my bed and was back at it at 330pm to walk to the Ox Bow lake, there the Piranha’s live. Instead of my well traveled hiking boots, the guide instead on donning big black knee high rubber Wellingtons. They were tight around my calves and a little loose in the foot. Plus they were HEAVY! Not only would they protect my tootsies from the exterior damp, they guaranteed that my socks would be wringing wet by the end of the walk, since their breathabity does not exist. Off we clomped into the jungle, stopping from time to explain something, like an ant or a Brazil Nut, or a termite. We ended out way down the tail avoiding anything that even looked damp. Good golly why are we wearing the ‘Wellies’ if we are going to step around all the wet ? I could have worn my well loved hiking boots from what I've seen so far. Then we stepped across a damp onto a root and the Over-boot slipped and I felt my calf muscle pop ! Fuck ! Shit ! Hell ! In two steps it was sure I was out of going any further. and dreading getting back to the lodge. “Do you want to go on?”. No thank you. “Are you okay?” Limp, step, ouch – No I am not. Limp, step, ouch on I went. He stuck with me, at least he didn’t shoot me and leave my body for the carrion eaters, but he kept asking if I was alright with the inclination in his voice saying – You are fine. I sure a fuck didn’t feel alright. He walked e back as I half stepped all the way back to the lodge What took 20 minutes to walk took an hour to hobble. As soon as we got to the lodge it was Adios Muchacha and he was about to take off. Then e saw I was struggling with my right boot so (I felt) if not begrudgingly, at least inexperienced y assisted me getting that sucker off. Then he hit the highway, I had to call him back to give him a couple bucks.

I am putting it down to inexperience and not ineptitude. But I ma be a whiny bitch, I at least expected him too walk me into the lodge or notify staff. Instead he melted away like the morning mist. The lodge manager found me later and gave me a bag of ice and a pain relief spray. I am not sure the spray did anything but it sure felt good going on.

I have the ice on a few hours and then went to be among people for dinner,, grabbed some more ice from the bar tender and hopped into bed with ice and elevation and drifted off.

Posted by Dorothy Macaw at 4:46 PM