.. and he said it was just a short walk

Again with the 3 am. Enough already! Well I was able to roll back over and get back to sleep until 5.

Out the door and off to the Concierge to give me some advice on hoe to best get to the Pantheon. I was looking for the closest Metro, since I’ve become the Metro Queen. The Metro doesn’t go there. But! If you are walking it is just a short multi block trek past what you already know and then into the new “Beware! Dragons!”. A simple walk. Yeah. It’s not like any street runs longer than four blocks and then dead end’s and to have to turn to find the next street, or alley, or cow path, since the map makes almost no distinction from a 4 lane divided highway and a one car wide alley. Then when you finish with the Pantheon you should walk over here (another short walk) and then down here and over there and …

Okay thank you, I’ll be sure to see everything you suggested. (whispered “not!). I started out the door and lo and behold Mr Blue boy was on gate duty again. I happened to remember I had a shoulder patch from that unnamed Federal agency that use to pay me to show up for 30 years, until we both got sick of one another. I went to offer him that as a Thank you for being human yesterday, reward. He wasn’t having any of it. He did say in pretty good English. Thank you, but inside would not allow it. - Fair enough!

Back on my trek, down familiar streets and then into virgin territory. The street was about to “T” and my sense of direction has been so out of whack in this city, I may as well be in Stranger Things’ Upside Down. Left or right? I knew my next landmark, and a coffee place was right there. I opened the door and was greeted with.”I don’t speak English”.I said you do speak, and pointed in a couple directions. I showed her the map, pointed to me destination and she pointed off to the left. I told her thank you, and she almost smiled. Almost. 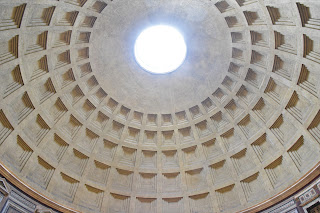 I followed the map and as the camera totters became more frequent knew I was in the right area. A short pit stop for a cup of coffee and a roll I was back on track. Suddenly I turned a corner and there it was. The Pantheon. Some big old round building with a domed roof that the Caesar type Romans built. They used some sort of super cement and it is still standing. Big Whoop! I’ll give it the obligatory look and get on to some other stuff. Wow! What a building! The architecture is outstanding and decorations are out of this world. Marble and gold in the pillars. Marble mosaic on the floor. Kings and artists laid to rest inside. 25 foot tall 7 ton doors to enter through. High ceiling that has a little hole to let the sun light in, that little hole is 25 feet across. It was amazing! Thanks Eamonn for reinforcing that I should see it. Raphael is entombed there. So I’ve see the works of Michelangelo and now Raphael. I expect to see some DaVinci in Florence. So I now have three of the Teenage Mutant Ninja Turtles under my belt. 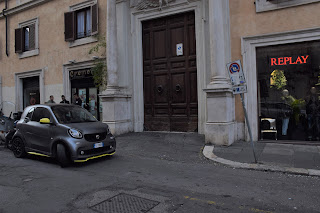 Stepping outside into the plaza, I look to m left and that is the exact spot where Audrey Hepburn noshed in Roman Holiday. Right there! It wasn’t a cafe, but a set of doors, but it was the spot. A little bit of a disappointment, one of those heroes falling off pedestals times.

The next place was easy. Look at the map. Look at the picture of the Pantheon. Look at the orientation of the door and turn left and start walking. Along the way was a really big church, so might as well have a look see, churches seem to be free. This church wasn’t as big as the one the Pope lives in, but it must to have homed a Cardinal or two. The altar was as ornate as Saint Peter’s and the ceiling was fresco-ed beautiful. Were the Sistine Chapel didn’t want anyone to share what they saw, this church welcomed cameras. They even had a very large mirror cocked to the roof so you didn’t have to stand there and stare up. Obviously the artist was not as famous as Michelangelo, Whatever this church paid the artist, they got their money’s worth. I was reluctant to leave, but my list was long today.

On down the street I walked. Did a quick local pedestrian direction check and found I was going in the right direction. Until I got to the corner and saw a sign pointing to my destination directly back the way I had just come. I sighed, but was really happy the wrong turn lead me to that church. Back to the Pantheon, past Audrey Hepburn, follow the rest of the tourists and five minutes later. I was at some big square, that was a must see. I saw, and wondered what I was missing. It had a nice fountain, a tall pointy thing stolen from Egypt. A guy with bagpipes and men in skirts, and restaurants lining the sides. My watch said I had walked over 2 miles, so I was allowed to have a real breakfast. Sitting at a white table clothed sipping coffee and eating scrambled eggs done to perfection is a great way to watch the world pass by on a Sunday.

With trusty map in hand I pointed to my next stop and could see it was either via that end of the square or that end. The waiter assured me it was that way. I stopped in at a church along that way. Another no shoulders or cameras church, but the choir was rehearsing. God they sounded Heavenly. I mean that. The director was seldom happy with the women, but never corrected the men. I guess you can’t go wrong with too much bass. Back on That-a-way in a few blocks I hit the Tiber. That was not what was expecting. The part of the Tiber I wanted was at least 10 blocks from that square. Looking at the map, it was clear I was in the wrong spot. A quick U-turn, back to the square to bitch at the waiter. But he was clearly cowering in the back of the restaurant fearful of my return. I kept the sun in my eyes and in about the right number of blocks I found the right part of the Tiber. Triple checked and turned left. 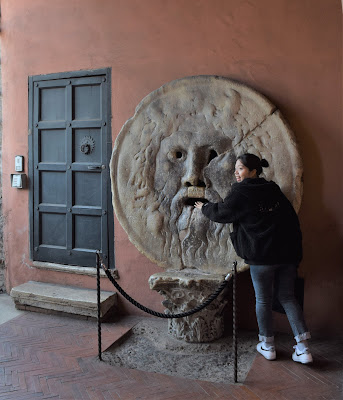 Before I knew it, I was in front of m destination. I was within 50 feet of where I asked for directions to the keyhole. This was one of the must see’s that the concierge circled. The line was long to get in. Maybe it was free chocolate Sunday. Might as well get I line. The line moved with fits and starts, an then it dawned on me. Me and most of Japan and Korea were waiting in like to see an artifact. A round disk like a sun with a face and a mouth. Gregory Peck (?) told Audrey Hepburn that it was the mouth of truth. If you put your hand in and lied it would chop off your hand. Everyone was in line to get their picture taken with their hand near the mouth. The church was totally secondary, it was just a place where the disk lived. I hopped out of line and went directly into the church. Frankly the Disk was the high point. Though there was an entrance to Hadrian’s crypt, which was pretty cool.

Back along the Circus Maximus and a left to the Colosseum and the subway beckoned. According to Apple Watch I had covered 7 miles on foot. According to me, I had covered quite enough. Metro, short stroll, taxi and I was back at my starting point. My bed.

Dinner time eventually came and I looked at the nearby restaurants and they all seemed to be closed for Sunday. I found one about 4 blocks from my hotel and really had a nice meal. I just wish all the men and women in this town would quit asking me personal questions. I walk in and the say “Prego?”, and I have to admit. “No, not prego. Just fat”. I guess I’ll get used to it.