Can you keep a secret?

I sure don’t understand this sleep thing. I am dead beat at the end of the day. My feet and calves are sore from walking. I stay up to a reasonable adult bedtime and still can’t sleep past 3am. Oh, well I’m functioning, maybe not at peak efficiency but enough I suppose.

Today was a tour day. I had signed up for a nice 3 hour tour of Michelangelo’s David and a walk around town. There was another option of a 6 hour tour that included the Ufizzi Gallery, a magnificent art gallery donated to the city by the Medici family. They were the Jeff Bezos of their time. Started out in cloth (not books) and moved into money (not everything). They bought art like some women buy shoes. I have to admit, it would be nice to see some of this stuff, but I missed art appreciation day in 6th grade. Oh, I can look at the Masters, but I ain’t no connoisseur of art. I thought seeing David was about all I really needed. Besides, six straight hours on m feet again? No thank you Sir, I do not want another one! Three hours will be just fine.

Breakfast was included in the cost of the room, so I grabbed a cup of coffee, and some scrambled eggs before heading out for a ten or fifteen minute walk to the meeting area. Check in went smoothly, there were only 7 of us in the group, all North Americans and Jessica the guide. This was the same tour company I had used in Rome for the Colosseum and the Sistine Chapel. One of the guides was outstanding and the other was in it for the job. I was hoping Jessica was one of the former and not one of the latter. She and the tour wrangler outlined what we were doing today. See David, walk around, break for lunch and we all meet back at 1245 to go to the Ufizzi. ALL? Not what I signed up for, but if it’s in the cards, I’ll take it. I don’t know the 6 hour tour was broken up and a six hour forced March of the arts. Since it was the wrangler who said that and not the guide I figured – Their loss, my gain. I like to think of myself as a reasonable honest person, I guess I’m not. 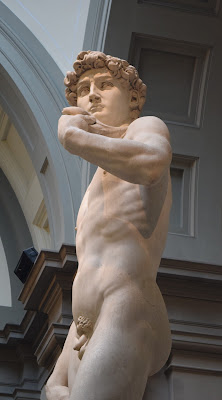 Get your ticket, disrobe, x-ray our stuff and magnetize your body before you can get in. Jessica walked us and talked us though a bunch of lesser know sculptors and a few unfinished Michelangelo sculptures. The all recognizable as works in progress. We've all heard his saying “I see what I want in the marble and it is my job to release it”. These four unfinished are referred to as ‘The Prisoners’ because they are still locked in the marble.

Through a doorway and there was David. What a breath taking piece of old rock. Huge too. Jessica explained why this was different than all the other Davids. All the ones before depicted after Goliath was given a terminal headache. This one is set just before the meeting. Both sizing the other guy up. One hand the rock and over his shoulder the sling. How from one angle he looks like an adult and a different angle a barely pubescent boy. And I’m not talking about what you think I am talking about, you dirty minded thing. I like to think, it was cold on the field of battle that day. No she was talking about his face when looking at it face on. She explained and really brought to life this statue. Then we went looking as some more art and then back on the mean streets of Florence.

Past plazas that had significance, past buildings that were also significant and churches that were big or worth a mention. We looked at the outside of the big domed church that is one of the symbols of Florence. Went into a small church dedicated t lovers, where it had the most interesting votive offering holder. And back to the Ponte Vechio. Where we were set free to reassemble at quarter to one.

I went in search of an ice cream shop she recommended. I had to do one stop along the way to get my directions cleared up. I was about to push on the door and then noticed they didn’t open until 12 and it was 1130. Time to kill. More people watching and then back at 5 til I was there, now behind two people. Shortly the church bells rang and the area shuddered and it was noon! Then noon 5. The man in front of me pulled out his phone and typed. Then he said “They are closed on Tuesday”. 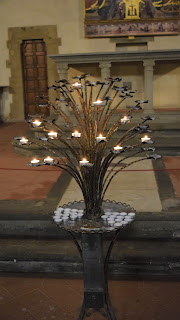 Besides that disappointment my feet were sore. I found a place to sit down in a restaurant and bought an overpriced sandwich and bottle of water, the rest and wait to rejoin the group. 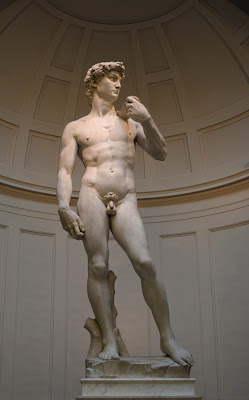 I saw Jessica and the wrangler talking and then start checking their list to see who is naughty and nice. The wrangler came up to me and said she just assumed all of us were in the same group all day and I wasn’t on the list. I asked if I could pay the difference and continue on. No, way. The Company had only so many tickets. - Okay, I understand. - If you want to bu our own ticket into the gallery. Jessica says you can stay with the group, but I can’t give you a headset. - How could I complain about that? - Oh, wait, we have an extra headset you can use. Just don’t mention this to the company. - I know how to keep a secret. The price difference was $60 more. All I had to put out was 12 Euros to get in! Thank you Wrangler lady !

The Ufizzi Gallery was great. We hit the high points, but it is so large that you could easily spend the entire day and see everything. Leonardo, Raphael and Michelangelo paintings. A short class on evolution of painting from medieval to Renaissance. A couple Botticelli paintings that I recognized. I certainly got my 12 Euros worth. At the end I slipped Jessica a 20 and she seems satisfied and I was thrilled.


I did get that ice cream on the way back to the hotel, but not from the ‘best’ one. 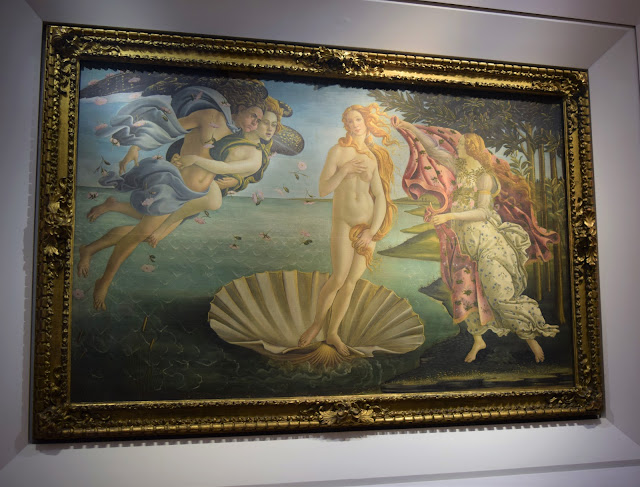