Today again started at 3:30, luckily the day was supposed to start at 4:30 so I didn’t cry too much. Today’s tour had a start time at 7:45 for a private viewing of the Sistine Chapel. It is one of those tours that if you are on time you are late. I needed to my bags packed because today was hotel moving day.

After checking out and getting my luggage safely locked I their baggage room I hit the cold city streets a few minutes after six. I found a little bodega that was open and got a coffee and a croissant before undertaking the underground. At six thirty in the morning the passageway had me on high alert, but everything went smoothly. I even got a seat and didn’t have to toss a nun to the floor to get one.

I was given two choices of stations to detrain at and chose the farthermost one, to squeeze every penny out of my fare. Emerging back in to the air like a mole I pulled up Apple maps and followed he little blue dot to he meeting place. Pat the gypsies selling this and that to other gypsies from blankets on the sidewalk. Then I saw ahead my Nemesis, six flights of stairs, from one street to the next. Okay, buckle up cowgirl, you signed up for this, so get to high steppin’. My heart didn’t explode in my chest and at the top the meeting place was mercifully a few steps down hill. I was nearly an hour early. 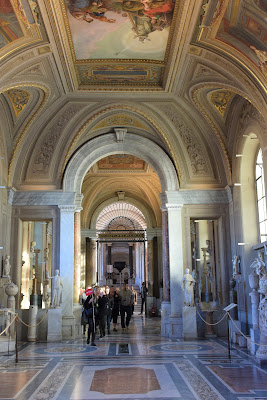 My guide from yesterday, with a different group. We chatted and she offered some great advice. I wanted to light a candle in the basilica for my grandparents and a friend back home. She told me there were no candles or even pay for electric lamps thee any longer. But in the Sistine chapel around 9 a priest would come in and say priest stuff and then be available for confession and he could say a blessing for the people on my blessing list. I didn’t think I had enough time on the our to give a confession, it was only three hours long, but the blessing would be nice. 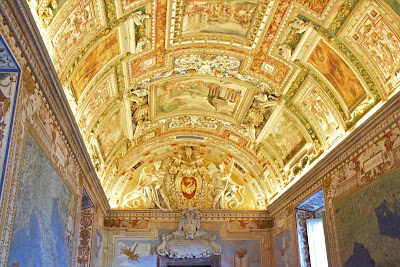 The seven of us on the tour headed out to go wait in line for our 8 am tee time. Today’s guide as a distant second from yesterday’s. She said all the right words, but the passion was missing. We walked down long corridors lined with art after passing through a security screening that would have made TSA proud. I wish I could have the words to express the grandeur of the hallways, but all those nickels, dimes and pesos dropped into collection plates over the centuries really paid off. You’ll just have to look at the images and try to get a feel for it yourself. 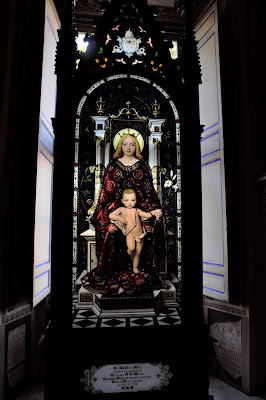 Upstairs, downstairs, and back upstairs we followed the leader, and after an hour we entered the Sistine chapel. We had been briefed on what to see and who was doing what on the walls and ceiling. No talking, so our guide at this point was useless and the camera on my shoulder was just there for the weight. Our private tour was as private as a Springsteen concert. There were only about 500 of us in there. The ceiling was 30 or 40 feet from the floor and so all the detail was way far away. God forbid that you might bring the camera to your eye to use the telephoto as a binocular ! Some little man with a very heavy badge informed me as such. I knew that God didn’t like knees and shoulders, since we had to have them covered to get in, in the first place. I didn’t know God hated glass optics so much.

Right on time the priest entered, said priestly things, including No Photos and was off to the corner to hear confessions and give blessings. He was so verbose that they had to call in a relief blesser. I told him who I was asking the blessing for and he broke it up into living and dead. The dead went pretty quickly. The living was a bit longer. Carl got his blessing as did my husband, my family and friends (So it looks like you are covered for a bit). Actually I was pretty touched and left him with a tear in my eye.

We left soon after and whizzed past statues and tapestries and little things that might have been interesting, but we were on a time table and the train had to remain on schedule. Then to Saint Peter’s basilica’s with a stop at Michael Angelo’s Piata. The altar an Saint Pete’s resting place was pointed out. Then t was time to collect the earpiece radios and bid us a farewell. 11:02 exactly on time. wouldn’t have been surprised to see a large puff of smoke as she disappeared. One minute she was there the next gone !

I wandered around for a bit, camera to eye. Bought a couple small things, mailed a postcard from the Vatican post office. Then strolled back to the Metro.

Back at the hotel I found a comfy chair and rested my crying feet. Called a taxi and was off to the new hotel. Guess what? Taxi’s in Rome cost more than Tuk-tuks in Bangkok. He dumped me at the correct address and I was looking at a building. Not a hotel. It could have been an apartment building, or an office building. It had a door and rows of bell buttons. I went inside and found a plaque or the place I am staying. Third floor via an elevator that was old when Audrey Hepburn was having her Roman Holiday in 1954. The room has walls and a roof and a door that locks. He toilet flushes, so I guess I’m alright.

I fell onto the bed and went to that place between awake and asleep. Two hours later I was feeling guilty spending time in a hotel room, so decided to walk to the Trevi fountain. A mere 10 minutes walk away. 10 morphed into 40, with two stops to ask directions. Google maps let me down. Trevi Fountain, nope. Fountana Trevi, nope. One I got there I found my smart pone thought it was Plaza di Trevi.

I was a mob scene. This is low season and I nearly had to stand on other people’s shoulders to get my iPhone to get a peek of the art and water. I got a few snap shots on the phone and tossed a coin into the fountain. I mean I better come back to Rome since the plane leaves from here, bu 50 cents is pretty cheap insurance that I’ll return to Rome. Then a stop at this restaurant to type this out and I think I’ll break the budget for the day and take a taxi back to the hotel. 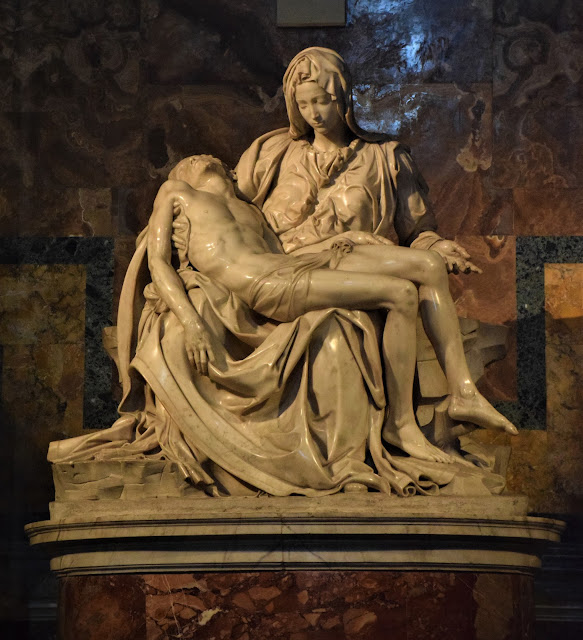