Hooray I slept in today. Didn’t wake up until 4 am, I must be getting used to the time change. The hotel has breakfast included I the price, so I begged a cup of coffee at 7am. Breakfast runs from 730 to 10:30. I emerged from my room around 8 and there was nothing left. I guess I’ll have to be faster tomorrow. 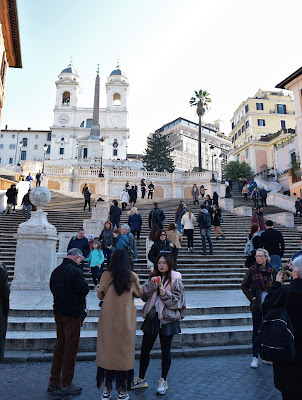 The first place I wanted to visit today was a subway ride away and the closest entrance as closed for, I don’t know. Lent? Repair? Friday? Who knows. The next closest was at the Spanish Steps a manageable walk. “Just go out the door. Go down the hill past the American Embassy and turn left at the end of the street”. The U.S. Embassy is directly catty corner from my hotel. My phone and Google maps were not being good companions this morning. Both the available ways were downhill. Right on the corner is the rear entrance to the embassy. There was a green soldier (Italian) and a blue cop (also Italian). Mom always told me if I needed help to ask a cop. I walked up to him and, honestly before I could open my mouth he said “I don’t know!” I said you do know, he said “No I don’t know”. Me, Yes, Him “No”. So plan B. Ask the soldier. “Is the Spanish Steps that way or that way?” – Spanish steps? Uh … Oh! Espania Plaza. Hey Mario (Blue cop) Which way is the Spanish Steps? (This was all in Italian) – Me, don’t ask him, he’s got a stick up his butt – Blue Boy “Go this way to the end of the street, turn left and right at the first street” (In flawless, but accented English) – Me See I knew that you knew ! Thank you VERY much. His directions were perfect.

The Spanish Steps left me baffled. What is the big flipping deal? They are nice stairs leading from a plaza to a church, with a small fountain at the bottom covered in tourists. Even without the tourists I wouldn’t have been awed. It must go back to the Audrey Hepburn effect. Even if she and Cary Grant, or Rock Hudson or what male lead she was with sat there and licked fancy ice cream, it still wasn’t worth much more that a second glance. Especially now that sitting is no longer allowed. I got a cup of coffee and a croissant for half the price of a cup of coffee at the Colosseum subway station. The prices I this town really vary from cheap to stupidly inflated. Enough sightseeing, time to get back on the trail.

Into the maw of the subway. Insert ticket, do it’s thing and door should open. NOT! Show ticket to nearby cop and explain. He inspects the ticket I think he must be from the C.S.I. division. Begrudgingly he opens the special gate for me and allows me to pass into the hollowed grounds of Rome’s Metro. I get on the right train, change lines like a local and get off a the correct station. 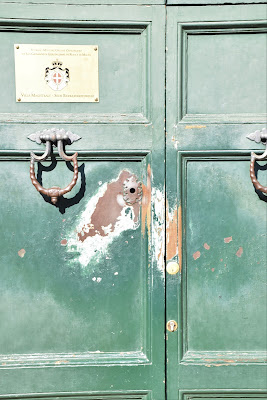 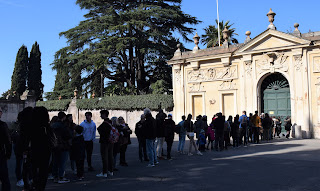 At street level I know my destination is at one end of the Circus Maxims, but this end or that end? Ah, barret wearing machine gun toting cops. I whip out my map like an old west gunslinger and point to where I wanted to go. “Here or there?”. There, of course. Oh well, the sun is out, the scenery is interesting, a great day for a walk. I hit he Tiber and realize I might have gone awry. Another co in a blue suit and golden epaulettes showed me the error of my ways. A block back and uphill and I was getting close. The yoga guy (not a cop, I think) pointed I was on the right track. A bit ore uphill and there was the line of people waiting! I’d made it! I now you are saying all this for a line? Well it was what was at the end of the line, a key hole in a door. No there is no hot babe or dude slowly undressing, it is a view of three countries. Italy


On the way back to the subway I passed a church that the guide from my first day recommended and went in. I sure wish he was with me, because the whole thing was lost on me, and I think that is a pity. I did find an altar to light candles so I lit one for all the Papists I know and love. 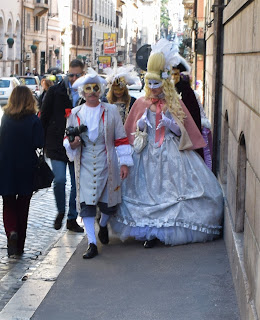 Back at the subway I got off at the main terminal and left the underground and went up to buy a ticket to Florence on Monday. Then went back down to the subway, tried my unexpired ticket in the machine. Handed it to a subway cop, he gave it a quick glance and opened the doors to the train. Back at the Spanish Steps I made a last review of the site from the bottom an the top and came away with my opinion unchanged. A short walk back to the Trevi Fountain to see it in the daylight. It is much better in the evening. I bought an ice cream. It was double the price of ice cream at the Colosseum. Crazy. I noshed and watched people for a bit. One rough looking guy was checking people coming out of the money exchange and then stood with is back to the fountain and very closely checked people out. Not just

women, but men too. I’d heard that Rome was a pickpocket’s haven. Either this guy was an undercover cop or a pickpocket and I strongly am leaning towards the latter. He talked to a pal for a bit and noticed me noticing him and abruptly turned to look at the fountain. 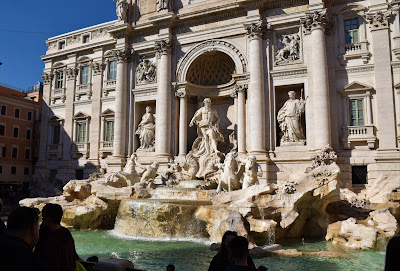 I only at half of my overpriced ice cream and was about to throw it away. At the trash can was the dirtiest man I have ever seen this side of Bangladesh. He hadn’t seen water since the last rain. He was Caucasian, but you couldn’t tell from looking at him. He was rifling through the trash for half smoked cigarettes. He was carefully straightening them and setting them aside. That I understood. I used to be a smoker and might have done the same in his circumstances. I asked him is he would like my ice cream. He snatched it like a Cobra and said in perfect English “Thank you”.

Back at the hotel I checked my Apple watch and found out I had walked over 6 miles today, and yesterday, and the day before too. I laid on the bed and cried when I had to stand. Eventually I did have to stand and walk back down to the Trevi fountain to a restaurant that caught my eye for dinner. With dinner finished, I think the only walking I’ll be doing is the walk to the Taxi stand. 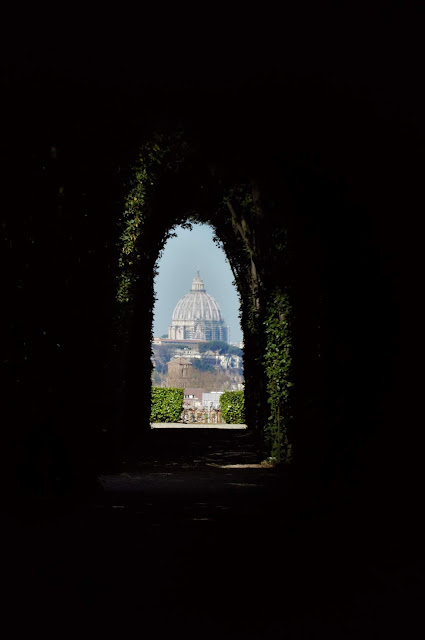