3:13 am, forget you clock! I have no plans for the day until dinner. Roll over and shut them peepers, And I did until 7. Yay, me !

Long slow shower. Long slow breakfast. I didn’t get out of the hotel until close to 10. This is the way a vacation should be. ‘Everyone’ says go to Cinque Terra. A series of small former fishing (now tourist mecca) villages. Five in all, stretched along the coast. Except for the first and the last the ones in the middle are inaccessible by anything except boat and now a train. ‘Everyone’ says go, you’ll love it. Well I’ll go but I’m not gonna like it! I’m not ! I’m not ! 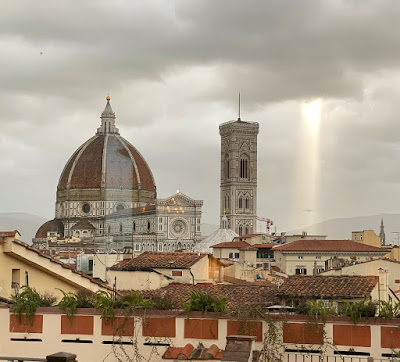 I want to go to Modena where the balsamic vinegar is made, and Enzo Ferrari was born. I want to go to Parma where the cheeses is hatched. I want to drive like an Italian. So I think I’ll go check out renting a car for a couple days. Joe’s junker cars wanted $250 for 4 days. Sorta big named wanted $200 (but offered no liability insurance), Budget Renta Car wanted close to $300 with full insurance, both car and liability. A far cry from the $90 a week some places on the internet advertised. Maybe, you can buy Balsamic vinegar other places than the source. Maybe I can look at red cars someplace else. I’’ll have to work on that one while I am in Cinque Terra and not liking it.

So off to wander the streets of Florence. No destination, just look and see things without a guide and at my slow turtle pace. It has suddenly turned cold and windy. Overcast with a hint of rain being threatened. Over breakfast I got a glimpse of sun rays through the clouds. I was watching the rays move across the city and was waiting for them to spotlight the Douma. You know, God looking down on the church of Ash Wednesday? Well it stopped just shot of making it. Guess God wasn’t feeling particularly benevolent this Wednesday. I was alright in my hoodie, but my gloves would have been nice to have along. 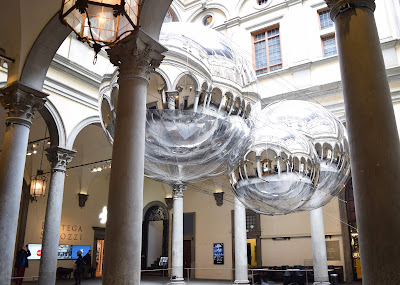 For some reason my camera and I are not on the same page today. It doesn’t want to focus on what I want it to focus on. I assume I clicked a software switch someplace in it’s brains and can’t figure out which witch is which. I’ll just have to go old school and use manual focus. I can’t remember using manual focus since ….. ahh …. 1969? Even then you had assist. You ad 2 hemispheres that you had to move to become a circle for the shot to be in focus. Today, I had to use my eyes!! Oh, God the inefficiency.

I am becoming a near Italian for my coffee. If you order your caffeine and don;t take a seat it costs less than if yo sit your butt down. So I am now a coffee stander. I still want a cup of coffee not a shot. At home coffee is an experience to savor. Here it is consumed, like a drunk coming off a bender. Coffee on counter, straight, no chaser, thrown into the mouth. Cup slammed on the marble counter. Ciao, and gone ! If it is a Latte’ maybe two gulps. Try that I Starbucks and they would call the aid car to remove the unstable person from their premises. 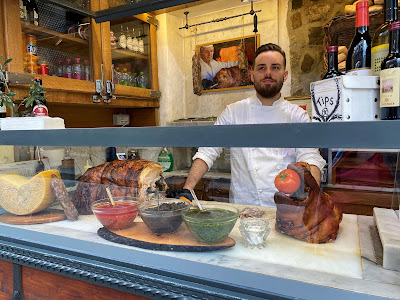 Without my Apple watch and phone today I would be someplace south of Rome. There are no reference points. it's mostly flat, and the part that isn’t flat is like the rest that isn’t flat. Where the might be a visual difference there is a building in the way. I am forever begging people for a general direction to get where I am going. The watch vibrates wen I am getting close to a choice. Back home it is easy. Snow is east, water is west. Not always, but as a rule you can follow it. I did manage to work my way back to try and recapture a few images I either poorly exposed or missed yesterday. It was nice t be fee of the reins and tethers of a guide for a day. Not nearly as informative, but I guess that is why you pay extra for free range eggs. (that doesn’t make any sense)
I generally don’t have lunch, per se. I might snack in the afternoon, but to eat real food isn’t what I do. But as was passing a smell grabbed me and pulled me to a stall, and forced me to order a sandwich with that magical animal the pig roasted to crispness and covered in black truffle sauce. I almost burst into song and started high kicking around the square. That was absolute best sandwich I have ever had. It is a meal that is very close to the top ten.

On the way back to the hotel I heard a thud on the walkway behind me. I turned and saw a late middle aged, perfectly presented woman on the curb. She had fallen and dropped her purse and shopping bag. I put out my hand and helped her up and a man came by to offer further assistance. We got her up and going, I handed her her bag and exchanged thank yous and you’re welcomes. I took a few steps and thought, pickpockets are rife in Rome. This is Florence. Where is my iPhone? Where is my Apple watch? Are my pockets still zipped? Everything was as it should be. Then I thought “you touched another person’s hand”, and reached in my pocket and bathed my hands in alcohol. Oh, what YouTube and the news have turned me into.

I had dinner reservations for 730. I wonder if I’ll get the early bird special? 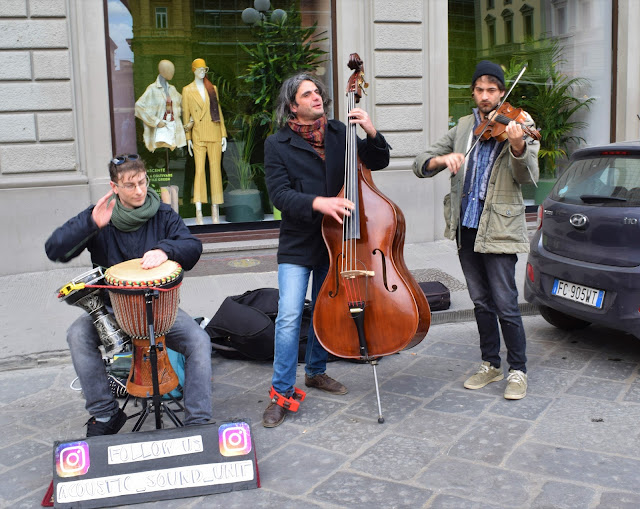 Posted by Dorothy Macaw at 1:44 AM