I was about to get a cup of coffee, come back to my room and book the first train back to Florence when I got up this morning. Last night’s forced march in a driving downpour had me sure of it. It was so bad that I almost didn’t go out to eat. Luckily there is a pizza joint on he other side of the wall. Since this is a summer tourist destination most of the restaurants are still shuttered. 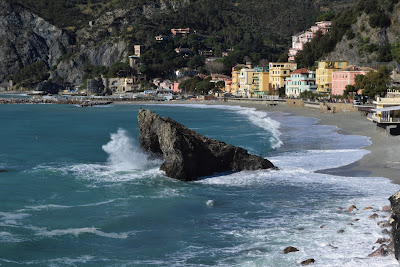 I stepped outside and was hit with blue skies and blinding sun. I never would have believed it possible. That canceled my internet search for fast trains. After coffee and croissant I went a wandering. At the top of my hill was the city information office. I asked her for an area map and she gave me one and explained things. You see that blue line? That is the easy trail overlooking the water. It’s closed for landslide repair. The next easiest? It’s pretty much closed too. - Where would you suggest for someone old and fat, bit mostly fat? - Two towns away on the train. Thank you.

I walked back downhill and came to a church and walked it. Pretty great little church with a pretty great ceiling. Down to the seaside and a few pictures and mostly enjoying the sun. Through the tunnel, there is an actual 100 yard long tunnel connecting one part of the village with the other. Down to the train station. After some cursing at the ticket machine I got my paper and then had to learn to validate the darned thing. I don’t quite understand, but once you buy the ticket, you have to get it stamped my a machine. If you don’t and the conductor checks your ticket, you are subject to a several hundred Euro fine. 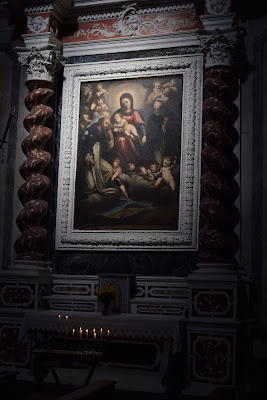 I had thought the trains between he towns was a special little train. No you get on a regular train and get off a couple miles later. I got off at the station and there is nothing there except station. The town is perched atop a crag of a mountain. I followed the crowd to the base and expected to find an elevator that you could pay for and ride up. That was an unmet dream. I looked up at the stairway, full of switchbacks and decided I’d need a burro or a llama to get me up that. I turned back t the station for the next train going my way. At the station there was a little bus, I asked about a ride and he said for 2.50 I had a seat. Narrow roads and switchbacks and horn honking we got to the top. The top of what exactly? The top of what looked like the village I had just come from, only steeper. I killed and hour and went back to the train.

Back on my home turf I went searching for an ice cream shop. Oh, right. It’s winter and none are open. There was this attractive restaurant on the seaside. It was after 3pm, let’s get an early dinner and watch a movie on the computer. The waiter ushered me to a great seat, and looking at the menu I saw they had a tomato based seafood soup. I don’t know if it is the same name here, but back home it is called Chopino. I’ve had it a few times in restaurants back home and have even made it. A nice thickened tomato and garlic base, in a fish stock. Simmered with fish and shell fish. Simple and good. 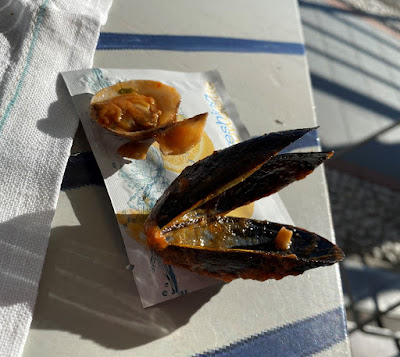 It came in this kettle and looked great. It wasted wonderful. I was surprised how much olive oil they used in the dish, but it is their recipe, not mine. Mussels, clams, shrimp and octopus. Soak some of the broth up with hearty bead and you have the perfect meal. All is good in the world … well there was that Mussel that had the cracked shell ….. and then the clam that one of it shell halves was broken and gone. Whoa Filter feeders with broken shells? Did they toss in maybe an opened shell as well? I think now would be a good point to stop eating this. I pointed out the broken shells to the waiter and he said – oh you know? They sometimes break when stirring the soup. – All the recipes I read and followed said, make the broth, let it reduce then a few minutes before serving add the seafood. The shellfish goes in last because they cook the fastest. 2 to 4 minutes. No heavy stirring. I tell the waiter to take it away, he offered to make a new one and I tell him that is not necessary. Then some suave guy comes over and asks what is going on. I explain that the shells were cracked and the waiter said them got cracked in the cooking process. I said I couldn’t be sure and was stopping on the safe side. He explained how I didn’t know anything, he was the owner and was listed in the Michelin book and on and on and on .. I could see that nothing I said mattered to him, nor would it shut him up. This is not a quiet table side chat, this is a full on baby stomp your feet rant. Finally I had enough and said “Just give me the fucking check” – Did you say to me to give you the fucking check?!?! Did you really say to give you the fucking check?!? How dare you say to give you the fucking check?!? There are children in this restaurant a who don’t want to hear you say fucking in here. – Err… I said it once, and you have just yelled it how many times four? Five? – You are a crazy lady! .. on and on. The waiter gave me the check, I tipped him 2 Euros, the service was good, and told him the Euros were for him, and left. The owner was still ranting as I walked down the street.

The TripAdvisor review will be fun.

I sat b the beach the rest of the afternoon watching the tide come in and the sun set over the hilltops. Yikes, as soon a the sun drops so does the temperature. Now all snug in my room with train reservations and a hotel in Florence tomorrow. 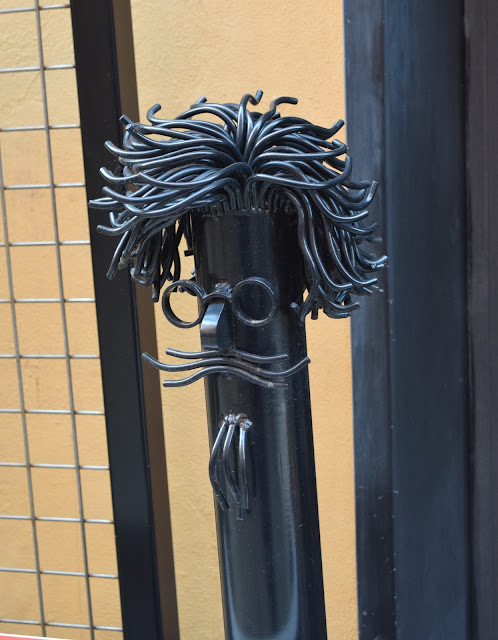