Big old rocks and being a mole

Evening and I am a little tuckered out. According to Mr. Apple Watch I tromped around over five miles today, but I am ahead of myself.

The day either started at 3:30 am when I woke from a fitful jet lagged tossing and turning, or 6 am when I got up. I had a 9:45 meeting with the tour I had booked before leaving home. They were very strict in their warnings “Be there or be square (and out the money)”. So I left the hotel a little after 7.

The first 2 blocks to the Metro (subway) went pretty well. The area is not what you’d consider posh, and I didn’t get mugged. That is a win almost any day. I walked down the steps and almost turned around. It was dingy, poorly lit and people just hanging around loitering. The way to get a ticket on the train is to push some buttons, decide how long you want a ticket for 120 minutes to a week. Slip on some Euros and magically a little piece of cardboard pops out and you have keys to the underground kingdom. Well my 20 kept going in and then being mechanically spit out at me. The machine said it loved to eat anything up to a 50. Well maybe that machine was having a bad day. So was the next, and the next. Zip! Spit ! Zip ! Spit ! Okay now what? Here is no one around except denizens and jumping the turnstile is frowned on in the US, and I assume here as well. There was a sign that said I could pay with my phone with one of those ((@)) sorta symbols. I walked up to the turnstile waved my magic wand phone. It asked for my pin and the doors to the kingdom parted and I entered. I have no idea how much I was charged. That will be a mystery until the bill comes.

I kind of knew where I was going. I figured if I could find my way to the main terminal I’d be able to find the B train or if I failed at the get back up to street level and sunshine and find a taxi. I did do one smart thing, I took a photo of the station’s name on the wall. This really came in handy on the ride back. Really handy. By now it was 7:30 and the morning rush was in full crush. And by crush I mean crush. You have seen images of the Japanese pushing people into the subway cars? We could have used a few of them this morning. I got to know several Romans better than most of my friends back home. After a bit we were barfed out at Termini and following the blue arrows found my way to the B train and to the Colosseum.

Bidding the river Styx and the door to Hades behind I emerged into the daylight at 8 am. Only an hour and 45 early. My friend Lynda would have been so proud of me. 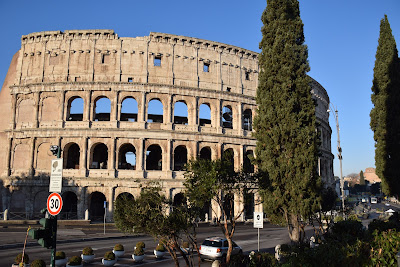 I took a saunter around the Colosseum looking for a coffee shop or some dispenser of caffeine and carbs. The one cafe didn’t open for an hour and the neighborhood 7-11 type store had carbs, but not caffeine. So I walked. Around this giant oval, past a big arch that Constantine must have copied from that big one in Paris France. Eventually I found myself back at the subway. Funny how that works. There I espied with my own little eyes, humans with cups of hot caffeine in their hands. I backtracked their tail and found a stand within the Metro that I had blithely walked be. He was selling coffee at priced that would have shocked Starbucks, but he was there. With a cup of pleasure and a mouthful of carbs and chocolate I sat outside and contentedly munched, sipped and fed the pigeons. Life was again worth living.

A the appointed’ish time I found the woman with the flag who going to lead me through the next three and a half hours. I felt like a school child looking for that red flag the rest of the day. A least she didn’t force to hold onto a rope like a class of per-schoolers on a field trip. I liked her, Ellianna. Sometimes a guide will focus on on person or group within the group. That 10 year old who asked questions about everything or that photographer who needs to get that perfect image out of the previous 49 had has already shot from that same location. She gave everyone some personal attention and no one was showered. You jammed the mono ear thing on, hung a controller around your neck and enjoyed her talk not matter where you were in the group. She was informative and funny and an all around good guide, among the best I have hired in the past. Sometimes a guide plugs in and internal memory tape and sews back as that mental tape runs. She seemed to really enjoy sharing what she knew, and she knew a lot. 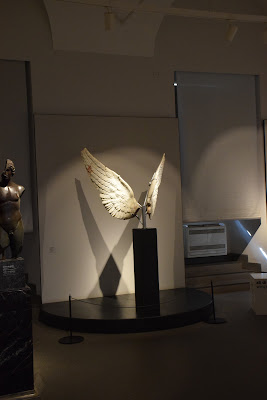 As far as the tour went, I was unimpressed with the Colosseum and pleasantly surprised how much I enjoyed the Palatine Hill and Forum. Before coming I had expected to jettison the group at the Colosseum and spend the rest of the day hanging out picturing battles against man and man or man and beat, with the occasional Christian Roman candle. She explained it well enough that the hour and a half we spent the was sufficient. The next stop was Constintine’s Arch and then up the Palatine Hill. She made us aware that it was a bit of a climb and made sure all of us were able. I felt a bit singled out as she looked directly at me when she asked. No worry, it wasn’t Machu Piccu and 9000 feet. I was glad to reach the top, but a few of the youngsters seemed to be replenishing their O2 as much as I at the top of the hill. Of course she was like a mountain Gazelle bouncing up the steps. 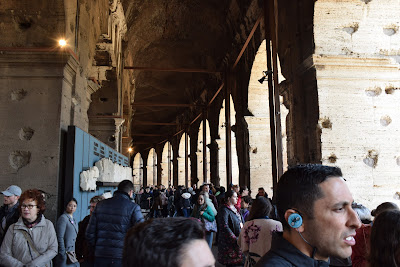 Hr presentation was flawless and really made the area come to life. The only problem was all those other tourists getting in my way. This was February, dammit ! They were supposed to be home working and going to school. Skiing down the Alps or almost anything except being in MY way. Why can’t you have stayed home and huddled under your blankets shivering in fear of the Woohoo virus? Maybe photoshop will make them go away.

As the stroke of 3.5 hours we were done and set free to wander as the wind blew us. I walked around the area, had my required Gilato and after a bit found my way back to the Metro. Frankly she wore me out. By now my 20 had morphed into a five. Maybe this would make the machine happy. Nope! It wouldn’t even sniff at my paper. I kept bending the five’’s nose and I wouldn’t even go in. I did fine a sales person who changed it to five metal disks. I put the first disk in and it just sat here. Finally the man behind me motioned that you had to move this thumb lever up to fee the machines. Well fed it barfed (maybe it pooped) out the proper cardboard and I was again a rider and not a pedestrian.. 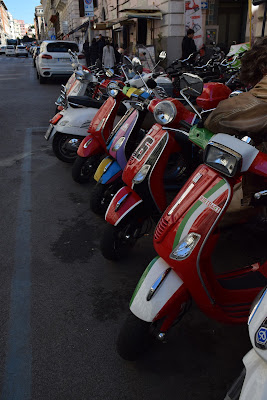 I retraced my steps, thanks to the picture of my morning train platform. Using my intuition I would have gone in the wrong direction. I must have looked dead on my feet, because I was. A nice man and a nice woman both offered me their seat. That NEVER happens to me.

Back at the hotel I flopped on the bed and didn’t move for 2 hours.

I came up to the hotel’s bar/restaurant to be informed that the restaurant was closed. I knew that the custom here was a late dinner, but didn't think 6 was too early. I was wrong. Not even bar food was offered for sale. I guess if you can’t eat, might as well drink. I ordered a vodka tonic and it came with corn nuts and olives. Well that was something. Then came the steamer basket of finger foods and small sandwiches. I was planing on eating dinner, but think the aparritivo was enough.

It is now close to 8:30 pm, guess I’ll close and go find the bed. 5 am seems about right to get to the Sistine Chapel by 7:45 tomorrow morning.