Try it, you'll lke it

Well, that was more of an adventure than I had planned, but let’s go back to last night.

I had reservations at a Michelin stared restaurant for dinner. I don’t get many chances for such an experience. Oh, I’ve eaten as several restaurants run my chefs, but never one of their restaurants that had actually earned a star. I figured I’d never get a chance again, so let’s blow today’s budget.

I made a reservation for 7:30 hoping to get in on the early bird special. When I say early bird, I mean that I was the only customer for the first hour. Just me and the staff. As the meal came I was watched like a hawk by the owner to see my reaction. I had ordered one of his three tasting menus. The only problem with the tasting menu is that the entire table has to order the same. One of the few times dining solo has it’s perks. 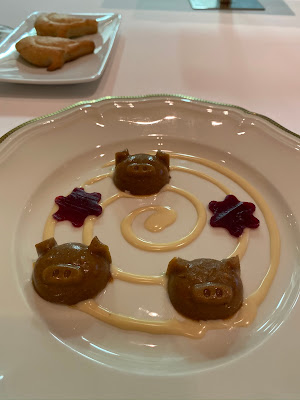 The meal started with the chef bringing a hot cup of broth, to warm me up. I was already pretty warm from walking to the restaurant, but it was welcomed. Then an Amuse Buche, and then the meal started in earnest. Wild boar, with Fiore Gras, pomegranate stars on a nice sauce. I think you are getting the idea. There were about 10 courses, each one as good or better than the one before. All the ingredients he used were ones you and I have used before, but certainly without his knowledge and touch. The only thing he made that I’d never heard of to eat was Rooster Comb. The red crown like thing that roosters have. It wasn’t bad a little gelatin like, just an odd thing to consider serving. The meal kept coming and coming, and one dish before the dessert came, I was about to call ‘Uncle’. I was stuffed, but I didn’t want to offend the chef, or miss out on what he came up yet. After two and a half hours the food stopped arriving. The cooks are in this giant fish bowl affair and so everything they do is on display. Along with the tasting menu I’d ordered a glass of red wine and a big bottle of water. When the bill came it was 115 Euros, somewhere close to $125. Christ ! I have spent more than that at a restaurant 20 miles from home. Granted it was a great meal, but it was a Big Mac in comparison to this delight. Before this meal I use to have a favorite meal, but it has now slipped to second place. This was the best meal I have ever had. 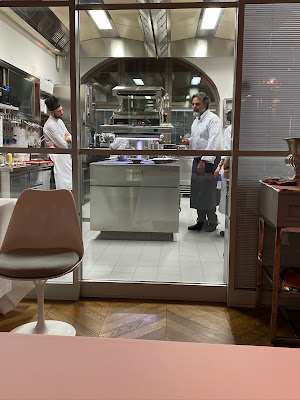 Leaving the restaurant a little after 10pm I walked back to the hotel, possibly a half to three quarters of a mile. Through well it alleys and streets feeling completely safe, except for the occasion Italian driver. When I got into bed I had a hard time going to sleep thinking about that meal.

Today was my travel to Cinque Terre day. I got t the madhouse of a train station and looked t both the major and the local arrivals/departures board and didn’t see my train. One of the staff steered me in the right direction and finding a seat we were off. I had left my big bag at the hotel and just brought my computer/camera backpack and my trusty blue backpack with 3 days of clothes. I stuffed these in the overhead rack. Ever since I had my camera borrowed from me in South Africa I have been very careful not to pull it out when on a train. There was a guy who go on late and took a seat near the door. He checked everyone out and his eyes strayed to my bags. I made evil eye contact with him and near the same time the conductor walked through. He leaned into the aisle to see where the conductor went and as soon as the conductor left the car, he was out of his seat and moving to a different car. 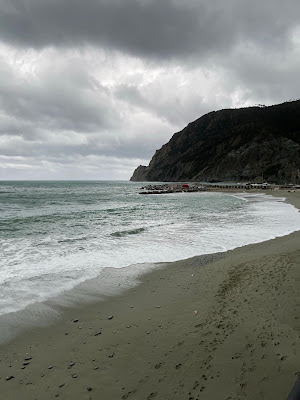 So we chug along and stop here and there until the end of the line, where get off and change trains. We got in at 1357 and my train left at 1402. I went to the right track and leaped on just as the doors were closing. After a few stops I asked a guy if this was the right train, I just had a feeling. He said no the 1402 was late, this was the train before that. I got off and the next station in Hicksville Italy. No ticket agent, nothing. I my Apple watch made English into Italian for a lady sitting close too the door asking when the next train back to my change point was. She said no, you want to go that other way. I got on that train and found a map where it was going and it wast where I wanted to be going. I hopped off and trotted along the train until I got to the conductor want to blow his whistle to send the train off. He held the train long enough to tell me to get the second train and get off at ???? and switch there. Fuck me ! I followed his instructions and here I am.

Ya, go to Cinque Terre, you’ll love it they said. It is 45 degrees, the wind is blowing 20mph with gusts to 30, and it’s raining. Eamonn you can go to the west coast of Ireland in February look out over the Atlantic and feel right at home, except you’d be warmer. This is going to be soooo much fun.

H, did I say the place I’m staying is a mile from the train station and there are no cabs? 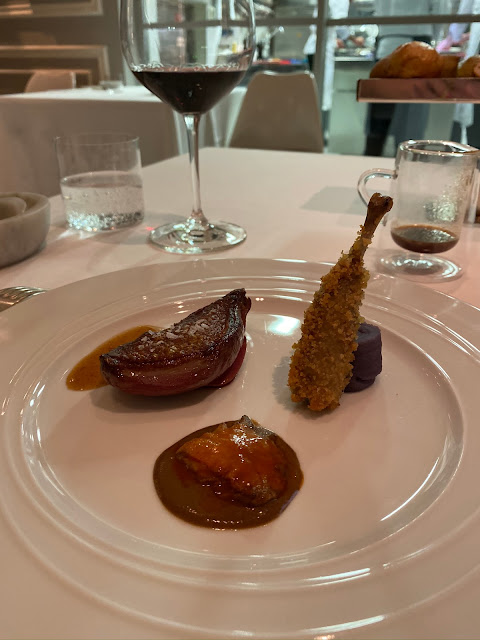