Back in Florence. Kinda like being home. I still get confused with the streets, just not as confused.

Everyone is talking about the Black Death that is killing millions and millions. At least that I the way they seem to be reacting. I think I took a class on history someplace along the line, maybe it was 6th grade. They were talking about the actual Black Plague in the 1300’s. Out of Africa on ships to devastate Europe. Have planes, trains and automobiles (but no John Candy) and a very mobile population. Whereas people in the 1300 seldom went more than 5 miles from their birthplace. Now that is a drive to the grocery store. We have a virus with a long incubation period. It is now on every continent (Maybe not Antarctica). I fear the genie is out of her bottle and stopping events, flights and voluntary travel might slow it down, but it coming to a town near you soon. Hopefully it will be after a vaccine is created, but I fear it with us like flu or common cold (some strains of the common cold are corona virus’). It seems to be more contagious than the flu but less lethal. Use common sense, wash your hands whenever soap and water is available, and alcohol based something (I prefer Vodka, Smirnoff not Grey Goose) when soap and water is not available. Keep your damn hands away from your face, especially the nose and mouth. I seldom wear mascara, but on this trip I do, it keeps me from rubbing my eyes. So men maybe you should let your freak flag fly until we get that vaccine.

Okay back to our usual irreverence. 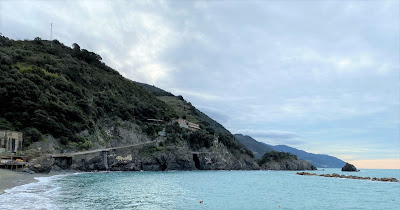 This morning began as always with a shower, but I was staying in an apartment and not a hotel and the coffee situation was dire. By dire I mean none. So I speed showered and ran down to the corner coffee shop. I had coffee and a roll there yesterday. It was good, and like a good Italian drank my coffee and ate my roll and then put both of the dishes on the order counter. Like a good American I gave her a small tip. Coffee is cheap here (a Euro and a half) and the same price for a coussiant, so a tip is in the area of 20 cents. Every town has a city hotel tax. Rome over $10 as I recall, Florence less, Monteresso was a Euro and a half. The woman who showed the room made sue, double sure, that I left the key on the counter and of course the three Euros. That left me with a two euro coin and a couple 100 Euro notes. I walked into the coffee place and pulled out he C note and sheepishly if she could manage it. She demurred it was impossible. That’s fine, just give me an Amaricano please. I took the coffee and sat down and drank my coffee. He asked me if I wanted a croissant now and come back and pay her later. I explained I was leaving in an hour so that was not going to happen. A couple sips later. She asked me what kind I liked. She was going to give me one !! Really! That was as sweet a thing as anyone has done for me this trip, and sure washed away the shellfish. 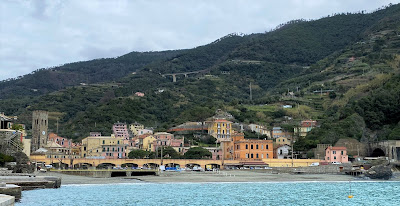 I got my bags, made sure the key and the three Euros were on the counter and was again back on the road. It wasn’t as great a day as yesterday, but the walk to the train station was hundred times better on the return than it was in the monsoon on the way in. I did make a small detour to capture a photo of the name of yesterday’s memorable meal tore front, so I can give then the grand review they richly deserve. The coffee shop at the train station could handle the bill so I got a second cuppa Joe and some carbohydrate energy for the trip back to Florence.

While waiting on the platform I chatted up a English speaking couple. They were newlyweds and came to Italy to celebrate. I got to go to La Jolla California and Ocean Shores, Washington. They had chosen Venice for theirs. The had chosen Venice specifiably for Mardi Gras . Right in the middle of the week’s celebration the city announced the celebrations were all canceled, because of the virus. I had read that fashion week in Milan was also curtailed and some models were still walking the runway with and empty room to strut for. The train arrived and we parted, but didn’t shake hands.

Hey! I got on the right trains, twice! The ride was without drama. My Apple watched like it though. I guess the rocking of the car made it think I was moving and it congratulated me on being so active, as I sat on my butt.

Once in Florence, I made a quick pit stop at the same hotel as before. I had left my luggage there. I gave the bellman my ticket and he brought me my suitcase and a Prada shopping bag, with something under the tissue paper. He insisted it was mine, and I insisted back it wasn’t. I didn’t use the ‘Fuck’ word with him but he was a hard sell. 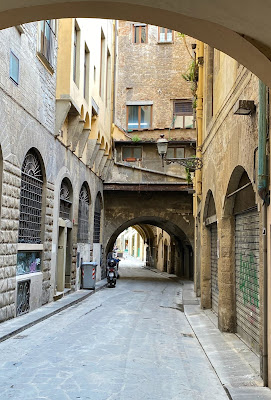 I left immediately to go to the restaurant that I had the fabulous meal at on Wednesday, but they were full and had no room for a poor wandering stranger. I asked for second choice and they gave me a name. It was nearby. I looked at the map and I was right across the river. A phone call and reservations were made.

A slow stroll back to the train station to secure a ticket for tomorrow to Naples, then the room to chill out and internet hunt a place to sleep in Naples.

Dinner at 7:30, so I’ll leave the hotel at 7 for a 22 minute walk, according to Apple maps. I haven’t had good success with Google maps this time. Apple is pretty good and the watch buzzes when you gt close to a direction change. Down I go past familiar sights, jostling people on the sidewalk. Alternating from walking on he walkway and the roadway. After a while, the tourists lessen and it becomes more locals. Then fewer of them. I check my phone to make sure I’m on the right path and it looks good. Then I walk across the bridge and there is no one. And the map says take a soft right. Well the soft right leads up a hill rated for a 4X4 in low gear or at least a Sherpa. I know people walk his type of street, but they have thighs and calves of iron. Mine are more on the melted lead type. Also it is one of those streets that curve and you can’t see what it coming up, or how far the corner is. I am sweating at the first corner and then have more of the same to go before the restaurant. I can see the light, my watch has dinged that I am close, still I actually have to stop twice more to catch my breath before crossing the threshold.

This better be good!