Sophia Loren llives down there

For you who get this via email. My apologies for that bad cut and past job I wrote yesterday. I don’t know how I managed to get those first paragraphs duplicated, I must have hit the wrong command in my haste to get that online. I have edited it in the online version.

Normal start of the day, normal coffee and roll. The streets were wet from the night’s rain, but the printed weather report at the front desk said clouds, but no rain. I took along my rain jacket just in case. I bought it for last year’s trip to the Amazon and never used it there, nor did ever expect to use it again. You know we hearty group in north west Washington laugh at umbrellas and rain coats and those that use them. I thought I’d bring it along if for nothing else as a bit of a break from the wind. 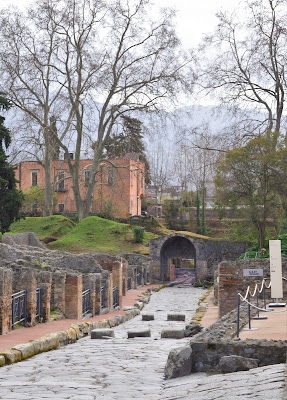 8:45 right on the button the mini bus was in front of the hotel to take me a seven unknown friends to see the ruins of Pompeii. I got on with a ‘Hello’ and was met with a wall of silence. It was interesting that they would book me with a bus of the deaf. On the way to the buss the guide was doing the up sale, and I bought it. For an additional $35 (E) I could add on the Amalfi coast. That seemed like a good deal, so I added it on.

Then we were off. Though he streets of Naples, which only reenforced that I wouldn’t want to drive here without super insurance and a crash helmet. At least until I’d had some experience in smaller towns. Past the cruise terminal and onto the freeway, that wasn’t free. And soon Naples was in the rear view mirror, or as we tourist say, the selfie cam. One instant we were on the freeway and the next we were pulling into a restaurant’s parking lot. We were in some roadside town that you wold only stop at to refill your vehicle and yourself. Turns out we were there, Pompeii. Usually the exit is through the gift shop, this time it was the first stop. This shop did physical art. Intricate carving on seashells, stone and some sculptures. I was more interested in the toilet. This one was free and the next one on the tour was a Euro toilet. I wonder if the extra Euro covers the cost of a toilet seat, I am so tired of helicopter peeing. Thankful that it did have toilet paper and soap. (speaking of toilet paper – both of my last hotels there has been a brand new roll on the spool. I just put it down the room not turning over that much in the winter. Today, housekeeping thought I was checking out. When I came back, new roll. What happens to the partially used rolls. Does the staff never have to buy TP for their home?). I decided to leave everything in the store, in the store.

Next a brisk walk and a sprint across the street and we were at Pompeii. You know that old town that used to be covered in dirt? First stop was a small amphitheater and then a larger amphitheater. We spent more time there than I felt was required. It’s a semi circle with steps that radiate out and up 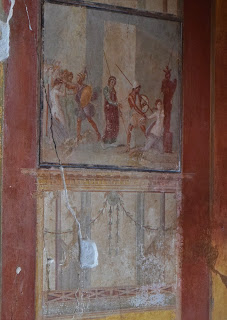 from the center of the hemisphere. Maybe I’m being too harsh here. The kids enjoyed running up and down the stairs. The older than me folks enjoyed cooling their sphincter on the cool marble.

A home for some rich bitch was next on the list. It was pretty cool. Then the dirt fell on top of the city it covered and protected the innards of the buildings really well. There were frescoes that were clear and vibrant as art work done in the 17th century not nearly 2000 years ago. I did find out that even if it is just a plain wall, leaning of frescoes is strictly frowned on. Whoops! 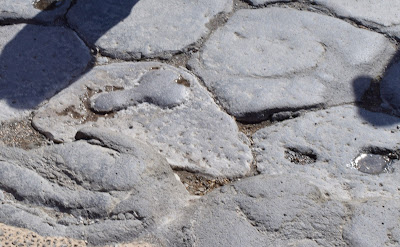 The streets were nearly empty, a bonus for early morning winter trip. The best little whorehouse in Pompeii was closed today to the dismay of the men and boys but the baths were open. The description she gave sounded exactly the same as the Hammams I have used in Morocco and Syria. A warm room for relaxing, perhaps a massage. and a hot room with water just short of boiling for the actual bath. These were a little fancier. The difference being akin to a limo and a tuk-tuk. Off to the side was a mold of a dead girl. When the ash and gasses came the deceased was covered and eventually returned to the earth, leaving a hollow void what the archeologists filled with Plaster of Paris and then removed it showing the death pose of the victim. Talk about bring you back to reality.

Back to the street we stopped at the dick carved into a stone in the street pointing the way to the brothel. I guess it pays to advertise. A free 20 minutes in the main square and then it was done. A two hour journey that just touched on some of the highlights.

Next lunch that was included in the cost. A conversation with a Doctor and two kids and of course former nurse wife. Two women from Holland that kept pretty much to themselves. Lunch here is like Thanksgiving dinner without the turkey. Main course, appetizer, salad and dessert, that it supper where I come from. 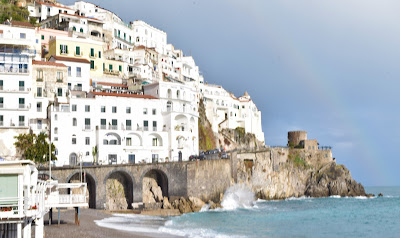 Then we spit up, half to another archeological site and my half to the Amalfi coast. My original plan was to rent a car and drive this route. Top down, British sports car. Head wrapped in flowing scarf, listening to Italian love songs under a blue sky. I am glad that is still there for another day. This day I would have missed all the sights. The road was like Chuckanut Drive, except it would go from Bellnigham to Everett, with more curves and a much longer drop. He drop would be so long you could turn on a song and listen to it full before you vaporized on the rocks below. Well maybe not “American Pie” but certainly “Get your kicks on Route 66”. It would have been a great drive 50 years ago, I doubt the road hasn’t changed markedly except for the buses and trucks now.

We passed Sophia Loren’s little shack on it’s own peninsula jutting to the sea. Little towns super glued to the mountain walls. Waterfalls and streams and that a stop in the actual village of Amalfi. Another cliff hugging town similar to the towns in Cinque Terre except this one was open for business. The shops and restaurants were bustling. The streets had people in them. It was great. Was that a rain drop? I think that was a second one! The next moment I have my hood up on my rain jacket and I’m walking down the street covering my camera from the deluge. Two minutes later it was over, and the blue skies and a rainbow was all that was left in it’s wake.

Back on the bus for the ride back to Naples. All of us had had all the fun we could stand, and I don’t think ten words were said the entire trip back. I know I was pretty done in.