So far the old saying is right “See Naples and die”. They were saying that since at least the late 1700s to early 1800’s. It is supposed to reflect on the beauty. Once you see it, you’ll never see anything as beautiful. If you ask me you’ll die from the expense. I should never told the taxi driver I was from the USA, because she hit me with the invisible “American tax” that is never posted, but always seems to be there. Next time I’ll say England, they are notorious cheapskates.

Last night’s dinner was at another Michelin star place. It was a little more expensive then the one I at on Wednesday, but that is totally understandable because of the need to hire the Llamas and the Sherpa to get the food up there. The food was good, but I don’t have a real good grasp on what exactly I had. It was a big secret. There was the Ala carte’ menu and then the Chef’s seven course and nine course tasting menu. That was it. Seven and nine and no description, none. It was up to the chef. On the Ala carte’ menu there was chicken liver, and I told the waitress I wasn’t so big on chicken liver. She said she’d tell the chef, after I ordered the seven course meal.

Most places that have a tasting menu, the server brings the dish and explains it. They did that here, only in a whisper and with English way, way obviously their second language. The first thing that came was a bunch of little bite sized things. Blah, blah, blah and Fried balls of Tripe. I wasn’t about to reject them after the day before, so I popped them in and chewed once and swallowed quickly with a gulp of wine. They didn’t taste bad, but even if they weren’t made with Tripe, I wouldn’t order them as a side.

Almost all these blogs are written in restaurants or bars. It keeps me from rubber necking the other patrons and allows me up to a couple hours to compose. This meal was no exception. When I get a good idea going, I don’t stop. Well the unknown dish that had a thick gelatin base and real flowers on to with nuts was really good. I had eaten two bites and got lost in the computer, and the serve stopped by and said “You don’t like” I told her I loved it. For the remainder of the meal she left me to write and eat at my pace.

The shrimp soup with froth topping and blah, blah was great, so was the beef Tartar with ?? and the pork whatever. Even when I asked to repeat what the ingredients were, I still couldn’t understand the women. I kind of wanted to tell them to drop the spiel and just bring me the dishes, but that would have just made waves.

I got about six and a half way through the seven courses, before telling the server I was throwing in the towel. It was getting to the point that I was so full that it would be work to finish it, and no longer fun. I guess no one has ever given up before. I was satisfied and would have been miserable to be forced to eat more. It was close to eleven pm and I still had a 20 minute walk back to the hotel. Then I was offered a ‘surprise’ to go to the museum on the third floor. I was sated and tired. Again no one it seems has ever declined the offer. They took it in stride and offered to call me a taxi. What the heck? I F-ing walked here, my ego won’t let me take a taxi back to my hotel. Besides it was all downhill until you hit the flats, and I know the way from there.

In this neighborhood at 11 at night there is no one around, I walked down to the Ponte Vecheio bridge in the middle of the street. It was nearing 11:30 by now and the squares were ALIVE ! Umping. Full of hundreds of young people. No one being rowdy, just hanging and having a great time. Sure the was the occasional tourist, but it was like the city had been given back to the kids of the town.

Safely back in my room I bedded down and told Siri to awaken me at 7:30. I woke up at seven to the church bells. I guess it is better than listen to the Muezzin calling the faithful to prayer at sunrise. Bathe and breakfast and out the door to catch the train to Naples. Passing the currency exchange I see the dollar has taken a hit. It was at $1.16 per Euro this entire trip, now it is $1.17. Not much, until I think about converting a grand and not it will cost me and extra sawbuck. 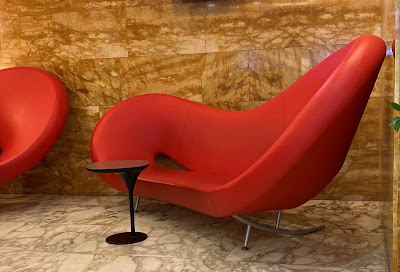 The train was about 30 minutes late, but I had bought the fancy seats and they come with the lounge access, so I had a sanctum sanctorum away from the craziness of the main terminal. I found a chair that was designed for people to sit in, and still wonder what the designer was thinking on one or two of the couches in the lounge. I guess style over function.

The train was 30 minutes late. My car was at the end of the train closest to Naples and farthest from Florence. The conductor made me get on the train three cars before mine, so she could get the train moving. For spite I made her load my heavy suitcase on the train. Then I had to do the sideways aisle dance through Business class to my car. I had the car entirely to my self. Had a nosh, wrote a TripAdvisor review, watched Italy scream by at 299 Km/h (183 MPH???)

Got here, got extorted on the taxi. Got to the room and now sipping a Vodka Tonic and listening to my neighbors discuss politics and I can’t figure who is who.